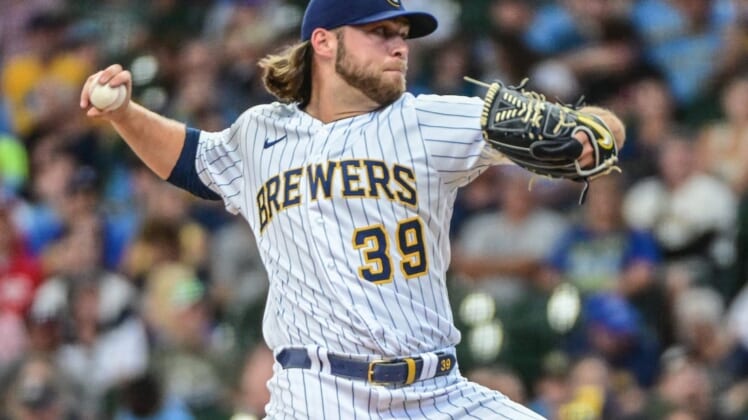 The Milwaukee Brewers will turn to ace right-hander Corbin Burnes as they attempt to salvage a split of their four-game series with the visiting Los Angeles Dodgers on Thursday afternoon.

Burnes (8-5, 2.39 ERA), the reigning National League Cy Young Award winner, will be opposed by left-hander Andrew Heaney (1-0, 1.16) for the Dodgers, who have won six of their last seven vs. the Brewers dating to last season.

The surging Dodgers prevailed 2-1 on Wednesday night behind Tony Gonsolin, who allowed just two hits over seven scoreless innings for his NL-best 15th win. Austin Barnes and Max Muncy provided the offense with solo homers as the Dodgers bounced back from a 5-4 loss in 11 innings the previous night.

The Brewers, who were blanked 4-0 in the series opener, were held to one run or none on Wednesday for the 19th time this season. They went 2-17 in those contests.

“It’s a tough team to beat,” Brewers manager Craig Counsell said. “We’ve got to play well to beat them. They’ve earned a great record, and they’ve obviously been the team to knock off in the National League for a while now. And you’ve got to play good to beat them.”

Heaney, sidelined much of the season due to left-shoulder inflammation, will make his eighth start and his fifth since coming off his second injured-list stint in late July.

Heaney, who has never faced Milwaukee, has not pitched more than 4 2/3 innings in any of his past four starts, but he has allowed just three earned runs over that span.

In his latest outing, against the Kansas City Royals on Saturday, Heaney gave up two runs on three hits in three innings but left after getting hit on the left arm by a line drive.

“I’m fine — just threw a pitch right down the middle and couldn’t get out of the way,” Heaney said afterward. “I wanted to stay in, but it didn’t happen. It was more of a precautionary thing, I guess.”

Burnes has a 2.47 ERA with 57 strikeouts and 13 walks in 43 2/3 innings over his past seven starts but is just 1-1 over that span. In his latest start, he allowed one run in seven innings but did not get the decision on Saturday against the St. Louis Cardinals.

“I thought Corbin was really (at a) high level of execution tonight,” Counsell said after the Saturday game. “You know there’s no secret as far as pitches or sequences, and you know what your stuff is going to do, and so it’s just execution. And Corbin just executed a ton of pitches tonight. Possibly the best start we’ve seen from him this year.”

“It’s a playoff atmosphere when you’re facing the team with the best record in the league and you’re competing with them each and every game,” said Milwaukee’s Keston Hiura, who had one of the two singles off Gonsolin. “I’d say it all just comes down to (Thursday), and you go from there.”