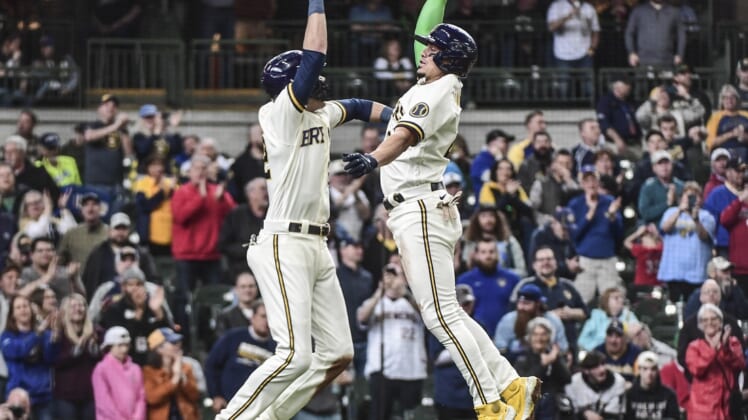 Willy Adames homered twice and drove in four runs as the host Milwaukee Brewers completed a three-game sweep of the woeful Cincinnati Reds with a 10-5 win Thursday afternoon.

It was the eighth win in nine games for the Brewers, who clubbed five home runs off Cincinnati rookie starter Hunter Greene. Christian Yelich homered as part of a three-hit game for the National League Central leaders, who outscored the Reds 34-12 in the series.

Tyler Stephenson homered and singled for the Reds, who lost their ninth straight and were swept in an entire road trip for a second consecutive time.

Since splitting their first four games of the season, the Reds have dropped 20 of their next 21 games. The loss was Cincinnati’s 13th straight on the road, its longest such skid since dropping 19 straight between July 5-Aug. 24, 1933.

At 3-22, the Reds extended the worst start in the history of baseball’s first professional franchise.

The Reds jumped out to an early three-run lead against Houser on an RBI single from Stephenson and a two-run single from Colin Moran with two outs.

But Greene (1-4) immediately gave back all three runs without retiring a batter in the bottom of the first. Luis Urias and Yelich drilled 99 mph fastballs over the fence for back-to-back solo homers before Rowdy Tellez doubled home Adames to tie the game, 3-3.

The Brewers added three more in the second off Greene when Yelich doubled home Jace Peterson with two outs. Adames then hammered a two-run homer to left-center for a 6-3 advantage.

The Brewers capped their home run derby against Greene in the third when Tyrone Taylor and Keston Hiura belted long solo shots off Greene’s fastball for an 8-3 lead. Adames added another tape-measure homer off Reds reliever Art Warren in the eighth for Milwaukee’s sixth homer of the day.

Since beating the Braves on April 10 in his major league debut, Greene has struggled badly, losing all four starts, allowing 17 earned runs in just 15 2/3 innings. In addition to the five home runs Thursday, Greene was tagged for eight runs in just 2 2/3 innings, allowing nine hits. Greene did strike out seven and walk just one.

The Reds loaded the bases in the fifth inning against Houser but could only manage one run as Houser left with an 8-5 lead.

He earned the win when the group of Trevor Gott, Brad Boxberger, Devin Williams and Hoby Milner combined on four scoreless innings.