Brewers scratch out run to win pitcher’s duel with Phillies 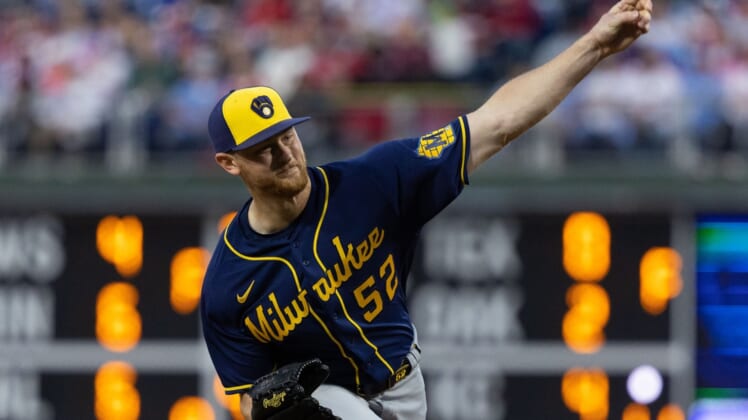 Christian Yelich hit an RBI sacrifice fly in the ninth inning for the game’s only run to lift the Milwaukee Brewers past the host Philadelphia Phillies 1-0 on Sunday.

The Brewers took two of three in the series, including the last two. The won on Sunday despite getting only three hits.

In six strong innings, Brewers starter Eric Lauer allowed five hits and no runs to go along with a career-high 13 strikeouts and just one walk.

Devin Williams (1-0) earned the win in relief and Josh Hader picked up his eighth save in eight opportunities with a scoreless ninth.

Phillies starter Aaron Nola gave up only one hit and no runs in seven innings. Nola struck out nine and walked one. Closer Corey Knebel (0-1) took the loss.

The Phillies managed five hits, and no player had more than one.

The Brewers’ Tyrone Taylor doubled high off the center field fence with two outs in the third inning, but Nola rallied to strike out Andrew McCutchen looking.

Nola struck out six Brewers through the first four innings.

Lauer was also stellar with eight strikeouts in four innings.

The Phillies’ Kyle Schwarber doubled off the base of the wall in right to open the bottom of the fifth. Alec Bohm followed with a walk. After Johan Camargo struck out, Matt Vierling singled to load the bases. But Lauer got Jean Segura to pop out to the third baseman in foul ground and fanned Rhys Hoskins swinging to end the threat.

Lauer struck out Schwarber looking on his 98th and final pitch to close the sixth.

J.T. Realmuto grounded out to shortstop and Schwarber struck out looking to begin the bottom of the ninth. Schwarber slammed his bat and helmet to the ground and was ejected by home plate umpire Angel Hernandez.

Bohm flied out to the warning track in right to end the game.