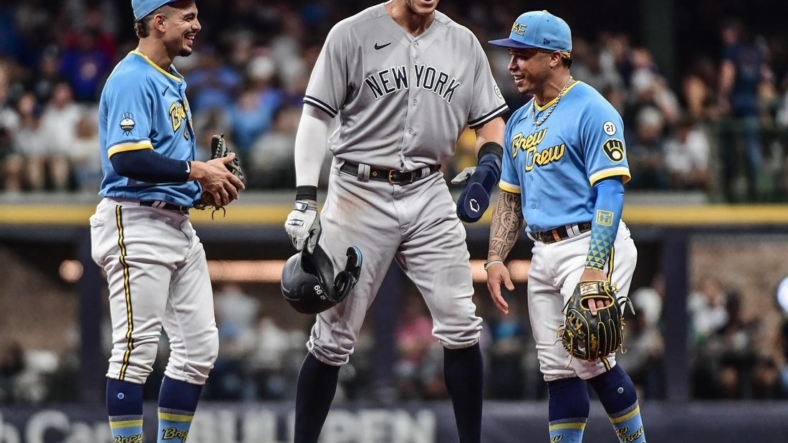 Rookie Garrett Mitchell hit a game-ending single with two outs in the ninth inning as the Milwaukee Brewers rallied from an early five-run deficit, blew a late lead and earned a 7-6 victory over the visiting New York Yankees on Friday night.

The Brewers (77-67) won for the sixth time in eight games and got their ninth walk-off win.

Hunter Renfroe started the inning by lining the first pitch off Clay Holmes (6-4) for a double to the left-center, and he took third on a groundout by Kolten Wong.

Milwaukee closer Taylor Rogers (4-7) blew a save opportunity for the ninth time this year by allowing Josh Donaldson’s tying homer to open the top of the ninth, but he stranded Oswaldo Cabrera at third to set it up for Mitchell’s game-winner.

Rogers struck out Miguel Andujar on a called strike that eventually got New York manager Aaron Boone ejected by plate umpire Edwin Moscoso, and then he retired Kyle Higashioka on a fly to center.

The eventful ninth occurred after Milwaukee took a 6-5 lead on a fielding error by New York shortstop Isiah Kiner-Falefa with two outs in the eighth. Kiner-Falefa tried to backhand a grounder by Willy Adames, but the ball caromed off the top of his glove as Mitchell scored from second base.

Adames started Milwaukee’s comeback with a three-run homer off Frankie Montas in the second inning, and he hit an RBI double off Lucas Luetge in the fourth. Rowdy Tellez lifted a tying sacrifice after Mitchell scored on Adames’ double, and the game stayed deadlocked until Adames hit an 0-2 curveball to Kiner-Falefa in the eighth.

Donaldson hit a sacrifice fly ahead of RBI singles by Kiner-Falefa and Marwin Gonzalez in a three-run first for the Yankees (87-57), but New York went 2-for-11 with runners in scoring position and saw a four-game winning streak end.

Donaldson accounted for two more runs in the second when Aaron Hicks scored on his groundout and Aaron Judge also came home on the play thanks to a throwing error by second baseman Wong.

Judge remained at 57 homers but went 2-for-4 with a walk to extend his on-base streak to 16 games.