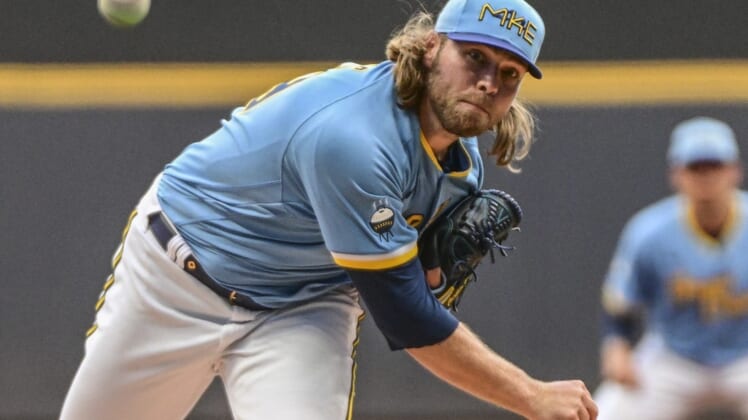 Luis Urias delivered a walk-off single in the bottom of the 13th inning to give the Milwaukee Brewers a 6-5 victory Friday night over the visiting Colorado Rockies in the opener of their four-game series.

With pinch runner Jonathan Davis aboard at second to open the 13th, Jake Bird (1-2) intentionally walked Kolten Wong. Urias then battled back from an 0-2 count to drop the game-winner into shallow right-center, scoring Wong.

Hunter Renfroe brought Milwaukee even at 5-5 with a two-run homer, his 14th with two outs in the bottom of the 10th off Robert Stephenson.

Colorado went ahead 5-3 in the top half of the 10th on an RBI single by Charlie Blackmon and a sacrifice fly by Brendan Rodgers.

The Brewers had the bases loaded with one out in the 12th after a pair of intentional walks, but the Rockies cut down a runner at the plate on an infield bouncer and then got an inning-ending fly out.

The Rockies tied it 3-3 with a run off Trevor Gott in the sixth when Jose Iglesias drew a two-out walk and Elias Diaz followed with an RBI double to the gap in right-center.

The Brewers had runners on second and third with one out in the bottom half, but Andrew McCutchen was out at home trying to score on a bouncer to short, and pinch hitter Mike Brosseau struck out looking.

Milwaukee erased a 2-0 deficit with a pair of homers in the third after Colorado scored two in the top half.

Blackmon staked the Rockies to a 2-0 lead with a two-run homer. After Bryant singled with one out, Blackmon drove a 3-1 pitch 413 to right-center for his 15th homer.

Willy Adames answered with his 20th homer, lining a two-out solo shot just over the wall in right. Rowdy Tellez dropped a double down the left-field line, and McCutchen followed with his 10th homer, taking a 3-2 pitch the opposite way to right.

Brewers starter Corbin Burnes, without a decision in his last three starts, needed 108 pitches to get through five innings. The reigning Cy Young winner allowed two runs on six hits with five strikeouts and two walks.