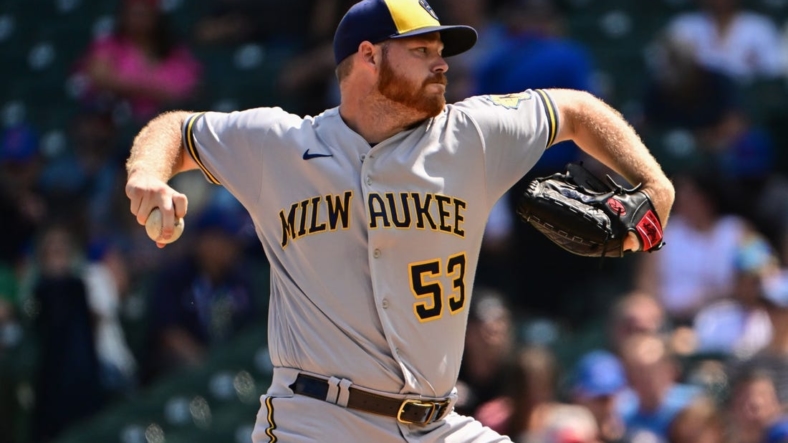 The Milwaukee Brewers are on the outside of the National League wild-card race entering September and hope to start a strong finishing kick when they visit the Arizona Diamondbacks on Thursday night in Phoenix.

The Brewers are 2 1/2 games behind the San Diego Padres for the third and final NL wild-card berth entering the four-game set against the Diamondbacks.

The series is the start of a seven-game road trip for Milwaukee that concludes with three games against the Colorado Rockies. Then the Brewers play 20 of their final 26 regular-season games at home.

Milwaukee enters the month six games behind the St. Louis Cardinals in the NL Central, so the bigger focus is on taking care of business in the wild-card race.

“It’s got to be a good month,” Brewers manager Craig Counsell said after Wednesday’s 6-1 home win over the Pittsburgh Pirates. “We’re chasing. We realize that. That goes into your thinking, for sure. We know we have to play well and play consistently and run off wins.”

Milwaukee has won four of its past five games and scored six or more runs in each of the victories during the stretch.

But that spurt only pushed the Brewers’ record to 12-15 in August. Right-hander Freddy Peralta, who allowed one run and two hits in five innings on Wednesday, said the club will respond to the situation and have a strong September.

“Challenges are really good for us as a team,” Peralta said. “We always play better when we’re in that kind of spot, so we just have to keep doing it.”

This marks the first of seven games between the Brewers and Diamondbacks over the final five weeks of the season.

Arizona had a season-high five-game winning streak halted Wednesday when it was drubbed 18-2 by the Philadelphia Phillies.

The runs were the most allowed by the Diamondbacks all season, topping the 16 given up to the Cardinals on Aug. 20.

The Diamondbacks scored 45 runs during their hot stretch but were limited to eight hits during the loss. Jake McCarthy homered for the second straight night.

McCarthy, 25, is settling in as a big league regular and batted .308 with three homers and 19 RBIs in August.

“Baseball is a hard sport. You’re not going to have two or three hits every single game,” McCarthy told reporters. “So when we aren’t necessarily driving the ball, I think being athletes will help on the basepaths and defensively to just take pressure off one another so we don’t have to out-slug certain teams.”

Kelly is 5-0 with a 2.20 ERA over his past 11 starts and has allowed two or fewer runs in eight of the outings. Kelly defeated the Chicago White Sox on Saturday while giving up four runs and five hits over 7 1/3 innings.

The 33-year-old Kelly is 1-1 with a 4.44 ERA in four career starts against the Brewers. Christian Yelich is 1-for-10 against Kelly.

Woodruff is also unbeaten over his past 11 starts and has received no-decisions in each of his past five outings. He is 4-0 with a 2.35 ERA during the stretch.

Woodruff wasn’t involved in the decision against the Chicago Cubs on Saturday despite tossing six innings of four-hit shutout ball.

The 29-year-old two-time All-Star is 2-0 with a 3.68 ERA in five career appearances (four starts) against Arizona. Josh Rojas (3-for-6) and Christian Walker (1-for-4) have each homered against Woodruff.