Brewers hope to shake off late-inning collapse vs. Rockies 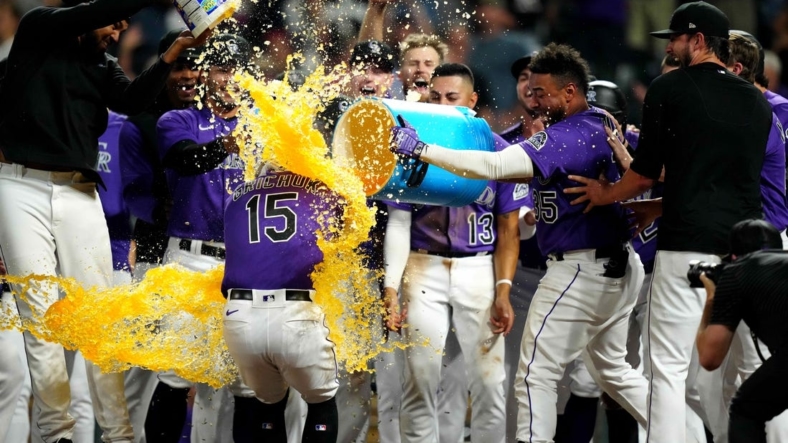 The Milwaukee Brewers are in a fight for a playoff spot, so the importance of every game becomes magnified. That’s why they want to take advantage of playing teams that are virtually eliminated from the postseason race.

Such as the Colorado Rockies.

It’s also why games such as Tuesday’s take a toll. Milwaukee blew a five-run lead in the eighth inning and lost to Colorado 10-7 in 10 innings, falling three games off the pace in the NL wild card race.

The Brewers (71-64) have a chance to leave Denver with a series win if they can take the rubber game against the Rockies (58-79) on Wednesday.

Freeland is 2-2 with a 2.52 ERA in four career starts against the Brewers. He got the decision in Colorado’s only win in a four-game series at Milwaukee just after the All-Star break, when he fired seven scoreless innings on July 25.

In his past five starts overall, Freeland is 0-2 with a 5.60 ERA, though he limited the Cincinnati Reds to one run in 5 2/3 innings on Friday.

Lauer has been strong for the Brewers this season, notching 12 quality starts in 25 outings, and Milwaukee is 15-10 when he takes the mound. He has struggled in his 10 career starts against the Rockies, going 1-4 with a 7.40 ERA.

All four of his losses vs. Colorado have come in the thin air of Denver, where he has a 14.63 ERA in five starts. Wednesday will be his second start of the season against Colorado. He got a no-decision in his July 24 start at home, when he yielded four runs on six hits in 4 1/3 innings.

With the Brewers scheduled to play a doubleheader at San Francisco on Thursday, Milwaukee manager Craig Counsell is relying on Lauer to provide some depth in the finale against the Rockies.

“You have to get innings out of your starters, your starters have to deliver innings for you,” he said Tuesday. “Every day you manage with the thought of tomorrow. I think we have to do that. But we’re also at a point in the season where we know wins are critical here. So we have to take that into consideration, also.”

The Rockies are taking a different approach to the final weeks of the season, getting a look at younger players. Three players — Michael Toglia, Elehuris Montero and Alan Trejo — who were in the minors on Opening Day were in the starting lineup on Tuesday.

Montero homered and Trejo had three hits in place of shortstop Jose Iglesias, who was placed on the 10-day injured list due to a right hand contusion.

It helps that the Rockies can expand the roster in September, although only slightly. Teams can have 28 players on the roster in the final month of the season, up from the normal 26. Colorado manager Bud Black is happy Major League Baseball limited it after allowing up to 40 players before 2020.

“You play the game one way with 26 players for five months, and then it radically changes the game in September when you have all these bodies to utilize,” Black said. “Specialized pitching, pinch hitters, pinch runner, and all these things come into play that you don’t have access to the first five months.

“The most critical games are in September and you’re playing basically with a different roster. So it never really made sense. I think this is much more accurate for the integrity of a pennant race.”