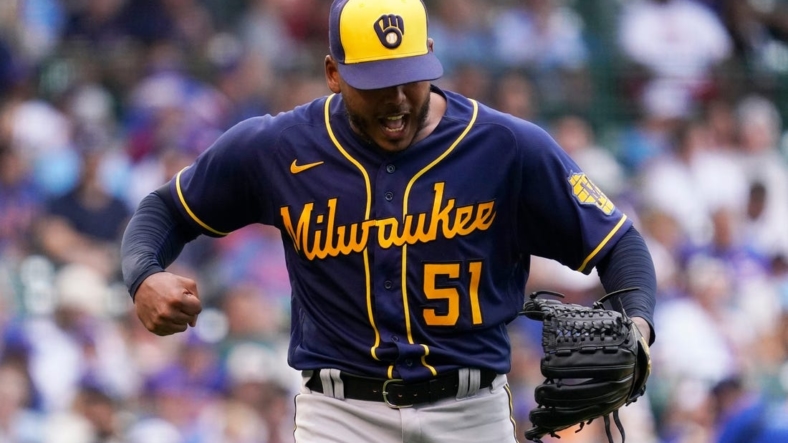 The Milwaukee Brewers will turn to right-hander Freddy Peralta to try to slow down Oneil Cruz and the visiting Pittsburgh Pirates on Wednesday afternoon in the rubber game of the three-game series.

The Pirates rallied for a 4-2 victory Tuesday night as Cruz went 2-for-4 with a double, single, walk, two RBIs and a run scored. Pittsburgh snapped a 2-2 tie in the eighth inning when Rodolfo Castro drew a two-out walk with the bases loaded. Cruz’s ninth-inning double provided the insurance run.

Kolten Wong accounted for both Milwaukee runs with a two-run homer in the fourth that gave the Brewers a 2-1 lead.

“Clearly, we’ve got to figure something out because we’re not doing a good enough job,” Brewers manager Craig Counsell said of Cruz. “I don’t think there’s any question about that. I think we all know he’s a talented player, but we’ve got to do better.”

Cruz had a three-run homer in the series opener, although Milwaukee rallied for a 7-5 win. Cruz has hit safely in seven straight games vs. the Brewers, going 10-for-26 (.385) with four homers and 12 RBIs. For the season, however, Cruz is hitting just .206.

With the loss Tuesday, Milwaukee missed a chance to gain ground in the NL Central on front-running St. Louis, which lost to Cincinnati 5-1 but remained six games in front of the Brewers.

Pittsburgh has won eight of the last 12 games against Milwaukee after losing the first six encounters this season.

Peralta, making his sixth start since coming off the injured list, has pitched six innings in each of his last two outings, without a decision. In his last start, he did not allow a hit over six scoreless innings, striking out five and walking one in a 4-3, 10-inning loss to the Cubs.

“Obviously, he pitched beautifully, but thought he was at the end of the line there,” Counsell said after that game about pulling Peralta despite him not allowing a hit. “Going through the order again, I decided that was enough.”

Peralta is 2-1 with a 2.94 ERA in 16 career games, including seven starts, against the Pirates. He is 0-0 in two starts against them this season, allowing two earned runs in 9 2/3 innings.

Thompson is 0-3 with a 7.14 ERA in his last seven games, including five starts. He has not won since June 5, when he tossed five scoreless innings against Arizona.

In his last outing, he allowed two runs (one earned) in five innings of relief in the Pirates’ 7-4 loss to Philadelphia.

Thompson is 0-2 with a 6.62 ERA in four career starts against Milwaukee, all this season. He has allowed 13 runs on 20 hits, including five homers, in 17 2/3 innings against the Brewers, along with nine walks.