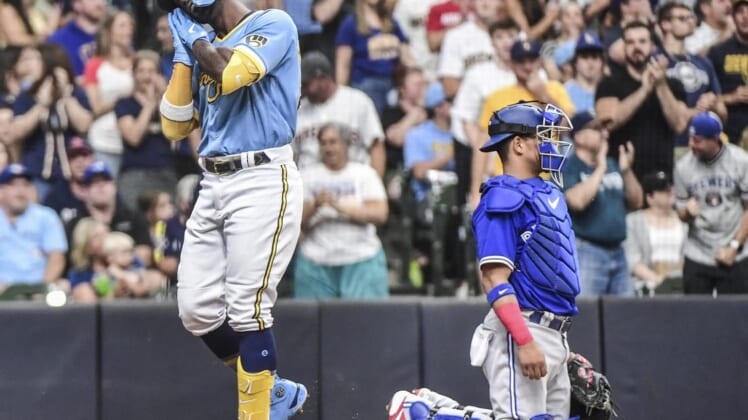 Corbin Burnes pitched effectively into the eighth and Andrew McCutchen belted a two-run homer as the Milwaukee Brewers held on for a 5-4 victory over the visiting Toronto Blue Jays on Saturday.

Toronto pulled within 5-4 in the ninth with a run off Milwaukee closer Josh Hader. Matt Chapman doubled with two outs and Lourdes Gurriel Jr. followed with an RBI single to right. Hader got Gabriel Moreno on a bouncer to first for his 22nd save in 23 chances.

Milwaukee staked Burnes to a 5-0 lead after three innings. Toronto got two in the fifth and then pulled within 5-3 on Bo Bichette’s 12th homer with two outs in the eighth. Devin Williams relieved and struck out Alejandro Kirk to end the eighth for his 18th consecutive scoreless outing.

Blue Jays starter Yusei Kikuchi (2-4) got just six outs, allowing five runs (two earned) on six hits in two-plus innings. He has not won in seven starts since his last victory on May 16.

Milwaukee scored three unearned runs in the second to go up 4-0.

Keston Hiura reached on a two-base throwing error by shortstop Bichette. After a pair of strikeouts, Hiura advanced on a wild pitch and scored on Willy Adames’ single to center. McCutchen followed with his sixth homer, sending the first pitch 367 feet to left.

Mike Brosseau opened the home third with his fourth homer to make it 5-0, chasing Kikuchi after 69 pitches.

Burnes had allowed just one hit through four innings before Chapman opened the fifth with his 10th homer. Gurriel doubled, advanced on a deep foul fly, and came home on Cavan Biggio’s groundout to make it 5-2.

The Brewers took a 1-0 lead in the first but missed an opportunity for a big inning.

Adames drew a 12-pitch walk, and Luis Urias and Tyrone Taylor delivered consecutive two-out singles to push across a run. Brosseau was hit by a pitch to load the bases, but Kikuchi fanned Victor Caratini to end the 40-pitch inning.