Brewers head to Colorado with sights still set on playoffs 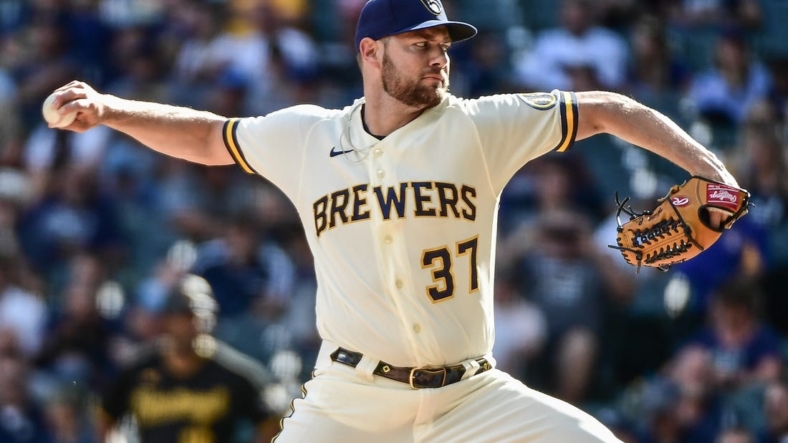 Their longest road trip of the season ended with a long day for the Colorado Rockies.

Colorado wrapped up an 10-day, 11-game trip through three cities, with the last two coming Sunday in a traditional doubleheader. Now the Rockies head home for their penultimate homestand, starting Monday against the Milwaukee Brewers in the first of three games.

The teams met in Milwaukee right out of the All-Star break, with the Brewers taking three of the four games in a wraparound weekend series.

The Rockies dropped seven of the 10 games against the New York Mets, Atlanta Braves and, lastly, the Cincinnati Reds. Colorado won a game in each city, including the first game Sunday, which was a makeup of Saturday night’s weather postponement.

In that 8-4 win, shortstop Jose Iglesias left with a hand injury and didn’t play in the second game. His status for Monday’s matinee is questionable.

“He’s been dealing with a hand thing,” manager Bud Black said on Sunday. “Rolled his hand on the one swing. He’s sore.”

Monday will mark the home debut of Michael Toglia, who made his major league debut Tuesday in Atlanta. The young first baseman has started strong, with six hits in his first six games including his first home run, but he has been playing mostly outfield since his call-up.

He’ll be introduced to the vast outfield at Coors Field and try to help Feltner, who his making his 14th start of the season. Feltner’s two wins have come at home, where he is 2-2, and he will face Milwaukee for the first time in his career.

Houser is getting the call because the scheduled starter, Freddy Peralta, is getting more rest amid his recovery from a right shoulder strain. Peralta, who has made six starts since his return from the injured list, will likely pitch in one game of a doubleheader against the San Francisco Giants in Milwaukee on Thursday, manager Craig Counsell told Brewers television.

In his most recent appearance, Houser pitched two innings out of the bullpen, after Counsell had been noncommittal about Houser’s return to the rotation. In one start since coming off the IL with an elbow injury, he surrendered five runs on five hits and four walks to the Los Angeles Dodgers on Aug. 24.

In three starts against the Rockies in his career, Houser has yet to record a decision with a 5.40 ERA in 15 innings.

The Brewers head to town after dropping three of four games in Arizona over the weekend, including Sunday’s 5-1 loss. Milwaukee spent half the season in first place in the National League Central, a division it won last year, but has treaded water while St. Louis has surged to 8 1/2 games ahead.

The Brewers are in the hunt for a wild-card spot but will need to catch San Diego or Philadelphia to reach the postseason. They are 2 1/2 games behind the Phillies for the third wild-card berth and three behind the Padres for the second.

Milwaukee is still alive because it has found a way to rally to win games, as it did Saturday night. The Brewers trailed by two in the eighth inning but sent the game to extra innings and won it in the 10th.

Those types of rallies have energized the team, pitcher Corbin Burnes said.

“I saw that we have the second-most come-from-behind wins in baseball,” Burnes said. “There are games we can really grind through it and beat a team like that. And these guys are hot. They’re playing good baseball, and they’re a good, young team.”