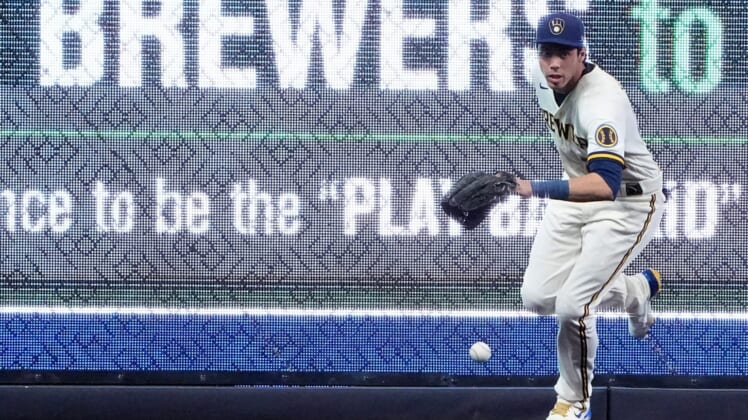 Willy Adames belted a three-run homer and Brandon Woodruff pitched effectively into the sixth inning to lift the Brewers to a 6-3 victory over the struggling Cincinnati Reds on Tuesday night in the opener of a three-game series in Milwaukee.

Cincinnati, off to its worst start in franchise history at 3-20, has lost 18 of its last 19 games, including seven straight.

Woodruff (3-1) allowed three runs on four hits in 5 2/3 innings to win his third straight decision. He matched his career high with 12 strikeouts with no walks.

It was the first time in franchise history the Brewers have had three consecutive games with 10 or more strikeouts by starting pitchers, following Eric Lauer (11) and Corbin Burnes (10).

Woodruff allowed a pair of solo homers in the fourth and departed after a two-out single by Tommy Pham in the sixth. Mike Moustakas greeted reliever Aaron Ashby with an RBI double off the center-field wall to make it 5-3.

Ashby followed with two scoreless innings and Devin Williams tossed a perfect ninth for his second save.

Rowdy Tellez’s fifth homer put the Brewers up 6-3 in the eighth.

Adames staked the Brewers to a 3-0 lead in the third against Tyler Mahle (1-4) with his sixth homer. Luis Urias, in his first at-bat after opening the season on the injured list, reached on an error and Kolten Wong walked. Adames then drove a 1-1 pitch 419 feet to center for his fifth round-tripper in the last eight games.

The Reds got two back in the top of the fourth on back-to-back solo homers by Pham, his fourth, and Moustakas, his first.

The Brewers answered with two in the bottom half. Omar Narvaez walked with one out and Lorenzo Cain singled. Urias followed with an RBI single to left, chasing Mahle after 92 pitches. Wong’s sacrifice fly made it 5-2.

Mahle was tagged for five runs, four earned, on four hits and three walks with two strikeouts in 3 1/3 innings.