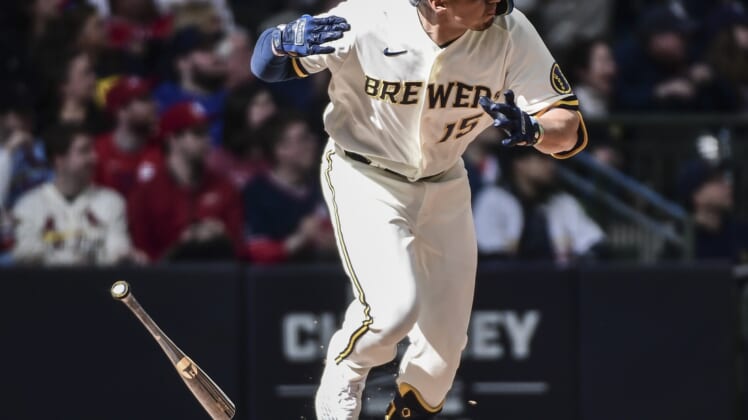 Tyrone Taylor drove in two runs with a bases-loaded double and Josh Hader notched his 100th career save as the Brewers held off the St. Louis Cardinals 6-5 on Sunday to gain a split of the four-game series in Milwaukee.

Hader, the reigning NL Reliever of the Year, retired Paul Goldschmidt on a bouncer to third and then struck out Tyler O’Neill and Nolan Arenado for his fourth save of the season.

Taylor put Milwaukee up 6-3 in the seventh. Drew VerHagen walked Omar Narvaez intentionally to load the bases with two outs and Taylor followed with a liner to left.

St. Louis rallied with two runs in the eighth off Devin Williams, who came on to start the inning. Arenado doubled with one out, Albert Pujols walked and Tommy Edman followed with an RBI single. Pinch-hitter Corey Dickerson drew a two-out, bases-loaded walk to make it 6-5.

Trevor Gott entered and induced Dylan Carlson into an inning-ending ground out.

Milwaukee went in front 4-3 in the fourth when reliever T.J. McFarland walked Willy Adames with the bases loaded.

Carlson reached on an error to set up the Cardinals’ third-inning rally. Tyler O’Neill drew a one-out walk. After Arenado fouled out, Pujols drove a 1-0 pitch 426 feet to left for his second homer of the season.

Wong scored on Andrew McCutchen’s sacrifice fly and Adames scored from second on Rowdy Tellez’s double. Keston Hiura then flied to right and Tellez got caught between second and third, but catcher Andrew Knizner’s throw back to second was low, allowing Yelich to score.