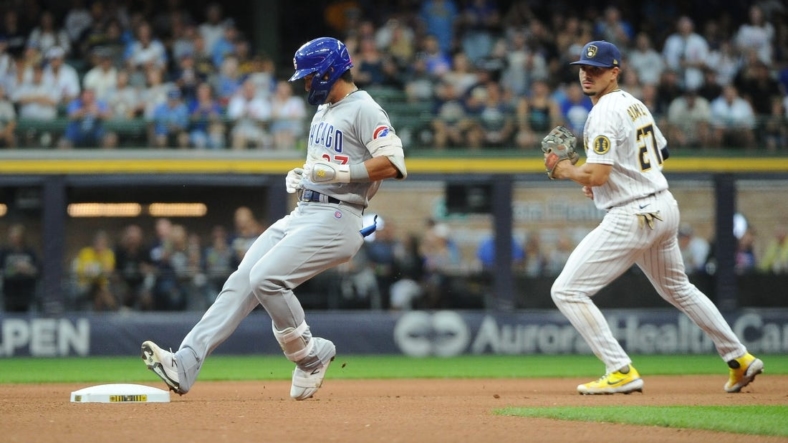 Christian Yelich’s three-run homer highlighted a four-run seventh inning that helped the Milwaukee Brewers snap a three-game losing streak with a 7-0 victory over the visiting Chicago Cubs on Saturday night.

The starting pitchers, Milwaukee’s Brandon Woodruff and Chicago’s Drew Smyly, essentially dominated before each left after six innings. Woodruff yielded four of the Cubs’ five hits and struck out 10 with one walk over 97 pitches. Smyly, meanwhile, gave up five hits and issued one base on balls and recorded two strikeouts on 86 pitches.

The Brewers were able to take advantage when the starters were gone. Against the Cubs’ Rowan Wick (4-7), Victor Caratini and Kolten Wong opened the seventh with singles. Caratini then came home on Chicago third baseman Christopher Morel’s throwing error after a sacrifice bunt.

Yelich then broke the game open with a drive into the right-field seats for his 10th home run of the season. It was the third of four hits on the night for Yelich, who went deep for just the third time in his last 43 games.

Wong clubbed a solo homer and Willy Adames a two-run smash off Michael Rucker in the eighth, as Milwaukee won for just the ninth time in the last 24. Brewers relievers Taylor Rogers (2-6), Matt Bush and Brent Suter held the Cubs to one hit and a pair of walks.

Meanwhile, Seiya Suzuki recorded two doubles for Chicago, which matched a season high with 15 strikeouts and was shut out for the second time in seven game. It came one night after posting just a pair of two-run Ian Happ homers in a series-opening victory 4-3 victory in 10 innings.

Despite the loss, the Cubs are 10-8 versus Milwaukee in 2022, and have already secured a winning season series even though they sit 17 games below .500.

Chicago announced Saturday that slugger Patrick Wisdom was placed on the 10-day disabled list with a finger injury.