Brewers erupt for 9 runs in win over Rockies 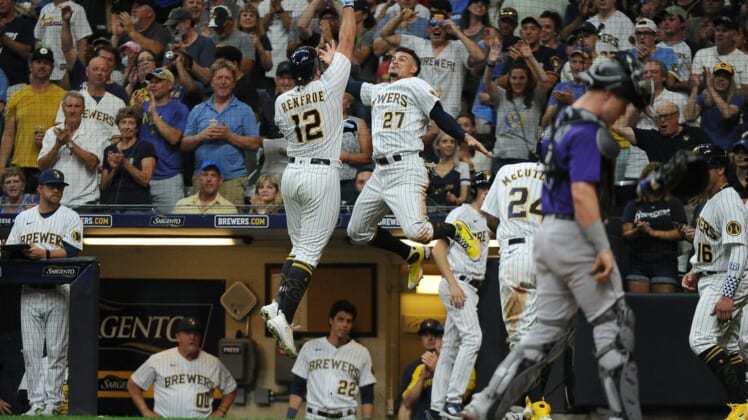 Hunter Renfroe homered for the second consecutive game and Brandon Woodruff allowed one run over six innings to pace the Milwaukee Brewers to a 9-4 victory over the visiting Colorado Rockies on Saturday night.

Woodruff (8-3) settled down after allowing a first-inning run, scattering four hits. He struck out eight and walked one. Since coming off the injured list, he is 3-0 with a 2.20 ERA in five starts.

Milwaukee led 9-1 entering the ninth before Colorado got a solo homer by C.J. Cron, his 22nd, and two-run shot by Yonathan Daza, his first.

Renfroe put the Brewers in front 3-1 with a three-run homer in the fourth. Willy Adames walked to open but was erased on a double play. Andrew McCutchen walked and Kolten Wong singled. Renfroe then sent an 0-1 pitch 424 feet to center for his 15th home run.

Renfroe, activated off the injured list on July 12, also homered Friday night. His two-run shot with two outs in the 10th brought the Brewers even at 5-5 as they went on to win in 13 innings.

Milwaukee batted around in a five-run sixth to extend the lead to 8-1.

Adames singled to open and Rowdy Tellez reached on an error by first baseman Cron. Wong’s one-out single scored Adames to make it 4-1. Jhoulys Chacin relieved and Renfroe beat out an infield single to load the bases.

Victor Caratini followed with a two-run double into the right-field corner. Renfroe then scored on a wild pitch. Christian Yelich added a two-out RBI single.

Tyrone Taylor added an RBI single in the eighth for Milwaukee.

Jose Urena (1-2), who began the season with Milwaukee as a reliever, allowed six runs (five earned) on six hits in 5 1/3 innings in his fourth start with Colorado.

The Rockies pushed across a run in the first inning on an infield single by Jose Iglesias, a two-out walk to Cron and an RBI single by Brendan Rodgers.

Woodruff then retired 10 straight before Randal Grichuk’s single to open the fifth. Charlie Blackmon’s two-out single put runners on the corners, but Woodruff struck out Iglesias.