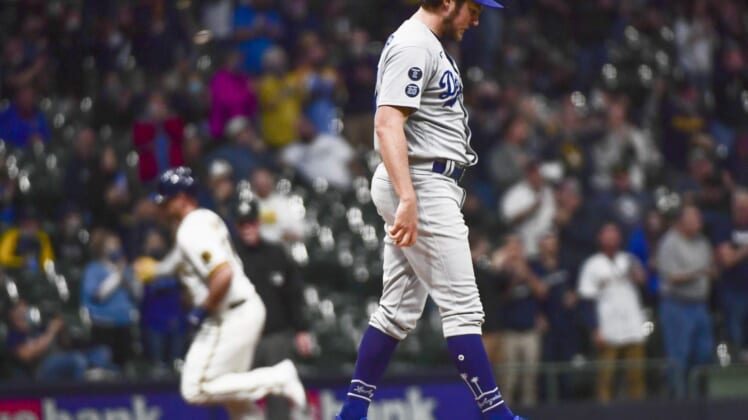 Eric Lauer threw five shutout innings in his season debut and the Milwaukee Brewers beat the visiting Los Angeles Dodgers 2-1 in the opener of a four-game series on Thursday night.

Lauer was recalled from Milwaukee’s alternate training site on Thursday and allowed four hits, all singles, struck out three and walked two.

Josh Hader gave up a run in the ninth before earning his sixth save.

Travis Shaw hit a two-run homer with two outs in the fourth to account for the Brewers’ runs.

Dodgers starter Trevor Bauer (3-1) was trying to become the second National League pitcher to start 4-0 this season. He pitched eight innings in the opener of the 10-game road trip, allowing two runs and four hits while striking out six and walking two. He threw 113 pitches, 70 for strikes.

Avisail Garcia walked with two outs in the fourth, bringing the left-handed hitting Shaw to the plate. He lifted a down-and-in curveball over the fence down the right-field line for the 2-0 lead.

The Dodgers didn’t put two runners on at the same time against Lauer until the fifth, when Bauer walked with two outs and Mookie Betts singled. Lauer then got Corey Seager to fly out to left and end the threat.

Lauer, who was 5-0 with a 2.11 ERA against the Dodgers in seven career starts with the San Diego Padres, departed after throwing 73 pitches.

Brad Boxberger replaced Lauer and pitched a scoreless sixth, as did J.P. Feyereisen in the seventh.

The Dodgers had a walk and two singles off Devin Williams in the eighth, but the Brewers turned a nifty double play in between to keep them off the scoreboard.

Los Angeles put a runner on second with no outs to start the ninth on a single by Chris Taylor and balk. Hader struck out AJ Pollock and Sheldon Neuse, but pinch-hitter Austin Barnes dropped a single into left to make it 2-1.

Hader then got Betts to fly out to right to end the game.