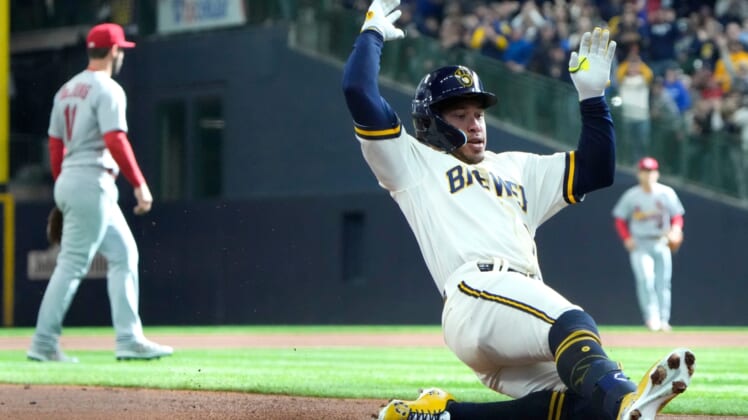 Brandon Woodruff allowed three hits over five scoreless innings and Omar Narvaez homered and doubled in a run to pace Milwaukee to a 5-1 victory over the St. Louis Cardinals in the Brewers’ home opener Thursday.

Narvaez had a solo home run in the second and added an RBI double in the third.

The Brewers reached Adam Wainwright (1-1) for four runs over the first three innings. Wainwright, who pitched six scoreless innings in his first start of the year, allowed four earned runs on eight hits in 4 1/3 innings, striking out seven and walking two.

The Brewers took a 1-0 lead in the first when Kolten Wong opened with a triple down the right-field line and Andrew McCutchen delivered a two-out single up the middle.

Narvaez made it 2-0 in the second with his first home run of the season, lining a 1-0 pitch 391 feet to right-center.

Woodruff escaped a third-inning jam when Harrison Bader and Yadier Molina opened with consecutive singles and advanced on a sacrifice bunt. Paul Goldschmidt reached on catcher’s interference with two outs to load the bases, but Tyler O’Neill flied out to shallow right.

The Brewers added a run in the sixth off Drew VerHagen when Jace Peterson walked and stole second before Wong singled to shallow center.

Edman’s home run to center in the eighth traveled 423 feet, but Gustave settled in and got the next six batters out to close the game.