Brewers come back to stun Rockies 10-9 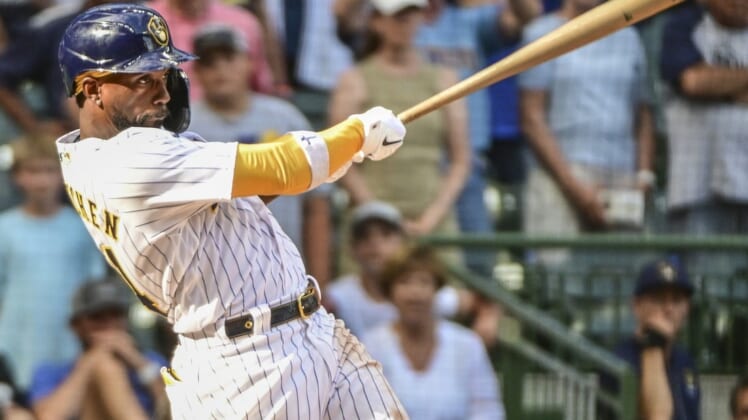 Andrew McCutchen capped an eighth-inning rally with a two-run double and the Milwaukee Brewers held on for a wild 10-9 comeback victory over the visiting Colorado Rockies on Sunday.

Milwaukee began its three-run rally off Alex Colome (2-3) when Christian Yelich drew a two-out walk. Willy Adames and Rowdy Tellez followed with singles to tie it 8-8. McCutchen then lined a 3-2 pitch over the head of centerfielder Yonathan Daza.

Colorado got a run in the ninth off closer Josh Hader when Garrett Hampson tripled with two outs and Daza singled him home. Hader got Kris Byrant on a comebacker to the mound for his 28th save in 30 chances.

Brent Suter (3-3) pitched a scoreless eighth for the victory. Milwaukee has won eight straight against the Rockies.

Colorado erased a 5-2 deficit with two runs in each of the fifth, sixth and seventh innings.

The Rockies went ahead 8-6 in the seventh on Elias Diaz’s two-run single with the bases loaded. Milwaukee got a run back in the bottom half on doubles by McCutchen and pinch-hitter Mike Brosseau.

Bryant pulled Colorado within 5-4 in the fifth with his fifth homer, a two-run shot to right.

Colorado went ahead 6-5 in the sixth. Jose Iglesias singled and Randal Grichuk walked. Diaz followed with an RBI single. Garrett Hampson walked to load the bases and Connor Joe delivered an RBI groundout to the right side.

Tyrone Taylor’s pinch-hit solo homer, his 10th, brought Milwaukee even in the bottom half.

The Brewers took a 3-0 lead in the first as Chad Kuhl struggled through a 38-pitch inning.

Yelich’s opening drive skipped past the diving attempt by right fielder Joe for a triple and Adames followed with a sacrifice fly. Luis Urias drove in two more with a bases-loaded double.

The Rockies got a run in the second on Grichuk’s RBI single and pulled within 3-2 on Charlie Blackmon’s RBI single in the third.

Hunter Renfroe put the Brewers in front 5-2 in the bottom of the third with his third homer in three games. Kolten Wong singled with one out and Renfroe sent a 2-2 pitch 418 feet to left center for his 16th home run.