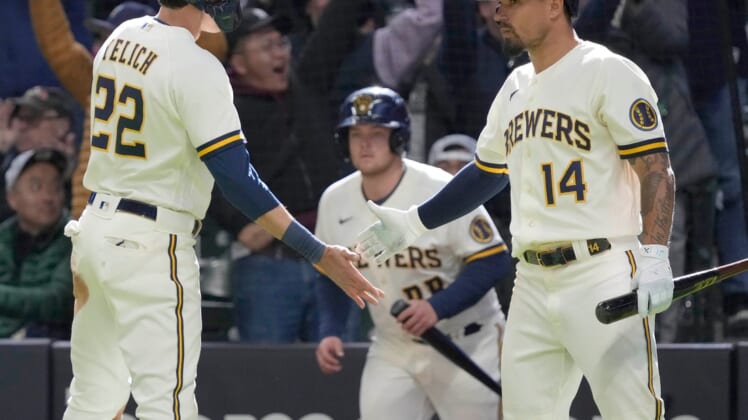 Even with Christian Yelich off to a slow start, the Milwaukee Brewers are still surging.

The Brewers will look for their fifth consecutive victory when they open a three-game series against the host Philadelphia Phillies on Friday.

After defeating the St. Louis Cardinals on Sunday, the Brewers then swept a three-game series from the Pittsburgh Pirates this week.

All that despite the scuffling Yelich, who is 8-for-41 (.195) with one home run after the opening two weeks.

“All (Yelich) can do is put everything on the table every day to be the best player that he can, and he does that every single day,” Milwaukee manager Craig Counsell said. “That’s all you can ask for as a player. There’s no question we need him to reach our goals. He’s doing everything he can every day to try to get there and try to be that productive hitter he knows he’s capable of.”

Despite an 0-2 and 1-3 start to the season, the Brewers weren’t fazed.

“Pushing the panic button was real there,” Hunter Renfroe said of being concerned. “I was like, ‘We’re good.’ And the same thing here. We’re good. We’re just heating up. The weather’s gonna heat up, the Brewers are gonna heat up. Our pitching staff is doing a great job.”

The Brewers will hand the ball to Freddy Peralta (0-1, 11.57 ERA) on Friday. Peralta is 0-2 with a 5.93 ERA in four career appearances (three starts) against the Phillies.

Over the last four games, the starting pitching has been much improved.

The Phillies will look to bring the positive momentum of a rare road win into their home series.

Philadelphia salvaged something from its seven-game road trip with a 9-6 win at the Colorado Rockies on Wednesday. The Phillies went 2-5 through Miami and Colorado.

Despite offseason additions of Kyle Schwarber and Nick Castellanos, the Phillies have won just five of their first 13 games.

“We’re a really good team,” said Schwarber, who hit a 468-foot home run Wednesday. “We should expect really good things out of us. Obviously, that comes with work, that comes with preparation. But I think that the more we can just take the pressure off a few bad games, we have to be able to put it behind us. We have to turn the page.

Castellanos is hitting .306 with three home runs and appears to be comfortable in his new surroundings. He believes the potent lineup, which also includes Bryce Harper, Rhys Hoskins and J.T. Realmuto, will keep launching homers.

“Well, I do know that every single batter in our lineup has the potential to pretty much hit the ball out of the ballpark,” Castellanos said.

The Phillies received an unexpected contribution from Johan Camargo with a four-hit performance on Wednesday.

“Obviously it’s a great opportunity,” Camargo said. “I want to give my best every day. I’m going to play my heart out.”

Ranger Suarez (1-0, 5.87 ERA) is scheduled to start for the Phillies. Suarez has never faced the Brewers.