Brewers aim to get back on track vs. MLB-best Dodgers 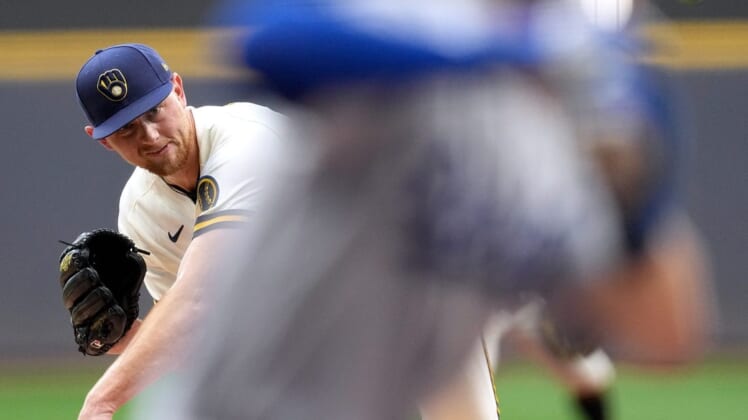 After struggling to get just one victory against the Chicago Cubs over the weekend, the Milwaukee Brewers are set to open a three-game road series against a team they apparently have a better chance against.

The Brewers will face the major-league-best Los Angeles Dodgers (84-36) in the series opener Monday night after losing two of three at Chicago.

And if the upcoming series sounds like more of a challenge than one against the far-under-.500 Cubs, it was just last week that the Brewers gave the Dodgers fits in a four-game set at Milwaukee.

The Brewers managed a split in last week’s series in the Midwest, taking the finale 5-3 from the Dodgers on the back of two home runs from Andrew McCutchen.

Despite playing even with the Dodgers so far, the Brewers have yet to get on track overall after making roster adjustments at the Aug. 2 trade deadline. Closer Josh Hader was traded to the San Diego Padres, and while Milwaukee received a talented package of players in return, new closer Devin Williams has two losses and a blown save since taking over the role.

The Brewers are just 7-10 since the trade deadline and sit off the pace in the National League Central, as well as in the NL wild-card chase.

In an attempt to win consecutive games for just the second time this month, the Brewers will send left-hander Eric Lauer (8-5, 3.58 ERA) to the mound.

Lauer gave up just two runs and four hits over seven innings against the Dodgers on Wednesday, but the Brewers still fell 2-1.

Since his days with the Padres, Lauer has found success against Los Angeles, going 6-1 with a 2.56 ERA over 10 starts.

The Dodgers will counter on Monday with left-hander Julio Urias (13-6, 2.40), who went five scoreless innings against the Brewers on Monday in a 4-0 Los Angeles victory.

With Walker Buehler done for the season with an elbow injury and Clayton Kershaw in and out of the rotation with back issues, Urias has stepped up after a somewhat bumpy start to the season when he was 3-6 but still had a 2.80 ERA after 12 starts.

While Dodgers starters Tony Gonsolin and Tyler Anderson are having impressive seasons, Urias has a postseason track record. He has 22 appearances (five starts) over five separate postseasons and 11 total series, going 7-3 with a 3.52 ERA.

“He’s been a constant for us,” Dodgers manager Dave Roberts said of Urias. “That’s what he’s become.”

“The more I throw, the more I feel like I find little things that work for me,” Urias said through an interpreter.

The Dodgers are on a nine-game home winning streak after a three-game sweep of the Miami Marlins that was capped by a 10-3 victory Sunday. Cody Bellinger and Max Muncy hit home runs, while Will Smith had three RBIs for the Dodgers, who are 16-3 in August.