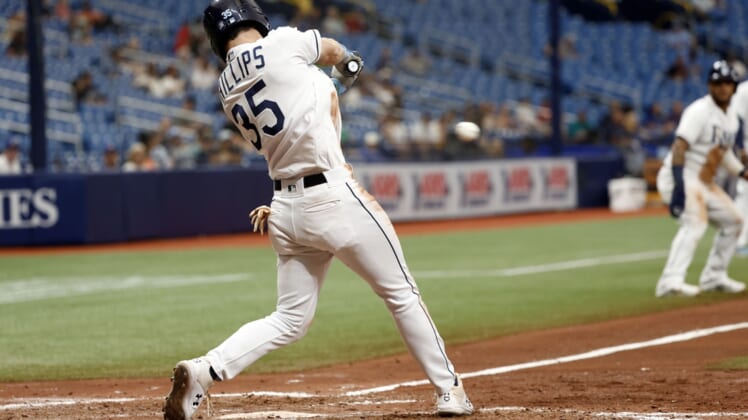 Brett Phillips had a pair of two-out, run-scoring singles and made a key defensive play in the ninth inning as the Tampa Bay Rays defeated the visiting Seattle Mariners 2-1 on Thursday afternoon.

Harold Ramirez scored twice for the Rays, who took two of three games in the series.

J.P. Feyereisen (1-0) earned the victory with two perfect innings of relief and fellow right-hander Ryan Thompson got the final out, catching pinch-hitter Tom Murphy looking at a called third strike, for his second save of the season.

The Mariners threatened in the ninth as J.P. Crawford led off with a line-drive single to right. An out later, Julio Rodriguez hit a shallow fly to right field that went off the end of the glove of second baseman Josh Lowe. But Crawford held up and was thrown out at second by right fielder Phillips. Rodriguez stole second before Thompson finished off the game.

Mariners starter Chris Flexen (1-3) was the loser despite allowing just two runs on six hits in 6 2/3 innings. The right-hander walked two and struck out four.

The Rays took the lead in the seventh. Ramirez led off by grounding a single into center and Josh Lowe lined a single into left. Taylor Walls grounded into a double play, with Ramirez taking third.

Phillips then hit a grounder up the middle that appeared headed for shortstop Crawford, a former Gold Glove Award winner, who was shifted just to the right side of second base. But the ball glanced off the back of Flexen’s leg on his follow through and rolled into shallow left field, allowing Ramirez to score.

Ramirez and Phillips also teamed up for Tampa Bay’s first run in the second inning, tying the score at 1-1.

Ramirez walked on a 3-2 pitch and was bunted to second by Lowe. Ramirez advanced to third on a groundout and scored on Phillips’ line-drive single to right.

The Mariners scored their lone run in the first. Adam Frazier grounded a single to center and Eugenio Suarez hit a two-out triple to right.

Mariners manager Scott Servais was ejected in the top of the sixth after arguing with home-plate umpire Shane Livensparger following a called third strike on Rodriguez.