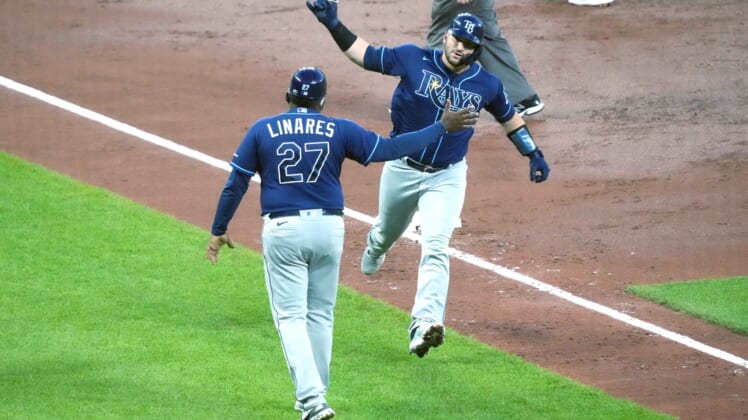 The Rays opened their seven-game road trip with a 15-hit output and five homers to win for the fifth straight time — with all nine starters recording hits.

Tampa Bay starter Luis Patino was gifted an 8-0 lead by his teammates, but the right-hander left after only 3 1/3 innings. He surrendered four runs on six hits while striking out six and walking two.

Baltimore’s Stevie Wilkerson went 2-for-4 with a double, two runs and an RBI in his first regular-season action since 2019. Austin Hays drove in two runs for the Orioles, who are 2-8 in the past 10 contests.

The Rays sent 10 men to the plate and tallied seven hits in the second against Orioles starter Matt Harvey (3-4), who lasted just 1 2/3 innings in his shortest start this season.

After Yandy Diaz and Wendle singled, Phillips put the visitors up 3-0 with one out in the second when he launched a 2-2 fastball to right off the walkway, through an open gate and out onto Eutaw Street behind the ballpark.

Willy Adames doubled off the third-base bag and Randy Arozarena dribbled a single up near third. Meadows then followed with the frame’s second three-run blast to right for a 6-0 lead.

Following Wendle’s three-bagger to open the third, Zunino matched Meadows for the club lead with his ninth home run to push the advantage to 8-0.

Making his season debut for Baltimore after missing all of last year, Wilkerson doubled and scored on Hays’ single to get on the board in the third. The club added three more in the fourth on RBI singles by Wilkerson and Trey Mancini and Hays’ run-scoring fielder’s choice.

In the Rays’ fifth and sixth, Zunino popped a two-run shot and Brandon Lowe singled in a run, respectively.

Choi hit a two-run homer in the eighth – his first – and DJ Stewart and Pat Valaika produced RBI singles for Baltimore in the ninth to round out the scoring.