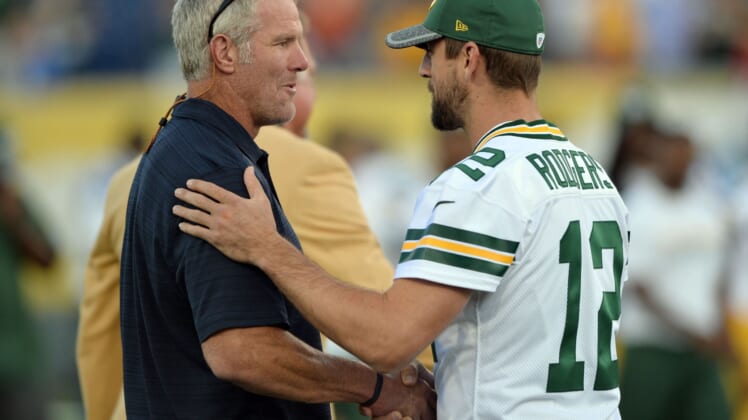 Aug 7, 2016; Canton, OH, USA; Green Bay Packers quarterback Aaron Rodgers (12) greets Hall of Fame member Brett Favre before the game between the Indianapolis Colts and the Green Bay Packers at the 2016 Hall of Fame Game at Tom Benson Hall of Fame Stadium. The game was cancelled due to safety concerns with the condition of the playing surface. Mandatory Credit: Ken Blaze-USA TODAY Sports

Brett Favre stood in the exact situation Aaron Rodgers now finds himself in after the Green Bay Packers drafted Jordan Love. Now, years after Favre and Rodgers’ relationship turned from merely colleagues to great friends, the Hall of Famer is offering some wisdom to his friend and Rodgers’ successor.

Of course, Favre hasn’t been shy about speaking on the Packers’ decision to trade up to select Love with the No. 26 overall pick in the 2020 NFL Draft. After an interview with The Rich Eisen Show attracted headlines for Favre saying Rodgers will finish his career elsewhere, Favre weighed in again on ESPN Wisconsin’s Wilde & Tausch.

When the Packers drafted Rodgers in the 2005 NFL Draft, Favre made it clear mentoring his future replacement wasn’t his responsibility. At the time, he was focused on leading the Packers back to a Super Bowl and said it wasn’t in his contract that he had to mentor Rodgers, but hoped he would just watch and learn.

Now that Rodgers finds himself in the same situation Favre experienced, Favre believes that Rodgers should take the same mentality in focusing on his own role as the starter and not being a mentor.

While Favre never went out of his way to help Rodgers in his early years, the iconic quarterback also made sure to help him when it was asked for.

Favre made it clear that he never sought to forge a friendship with Rodgers and he wouldn’t extend himself to help teach his successor the finer points of the game, like how to pick up on things in the film room. However, he made his knowledge and experience available whenever asked.

“I can’t tell you how many times Aaron would ask, or just tag along and watch film with me. And he would ask questions like, ‘What are you looking at here? What are you thinking? Why did you check?’ Things like that. And I would certainly offer my reasons,” Favre said, via Jason Wilde (H/T The Athletic). “Would I go out of my way to cultivate that relationship? Or say, ‘Hey, why don’t you come watch film with me?’ No. I’m not going to go out of my way. But if you ask, I’m not going to say no.

Favre and Rodgers have talked since the Packers drafted Love. Favre seemed to agree with another former Packers star that Rodgers will have a good relationship with Love and will provide the same kind of advice.

While he admittedly isn’t familiar with Love’s game or even the position the rookie is in, Favre still wants him to be successful. The team’s incredible stretch of success at quarterback with Favre already in the Hall of Fame and Rodgers destined for it.

The pressure of being in that situation can be overwhelming, but Favre’s advice to Love is rather simple and should help the rookie as he enters the NFL.

“I think the best thing Jordan can do is go in and not try to go in and fill Aaron’s shoes or Brett Favre’s shoes,” Favre said, via Jason Wilde (H/T The Athletic). “You’re trying to be the player that you are and maybe learn some tricks of the trade.”

If history repeats itself, the Packers will come out of this looking brilliant. Rodgers can be an excellent source of information for Love to learn from and could even teach him how to refine his game. Given the questions surrounding Rodgers’ long-term future in Green Bay, though, Love should take advantage of the chances while they are available.