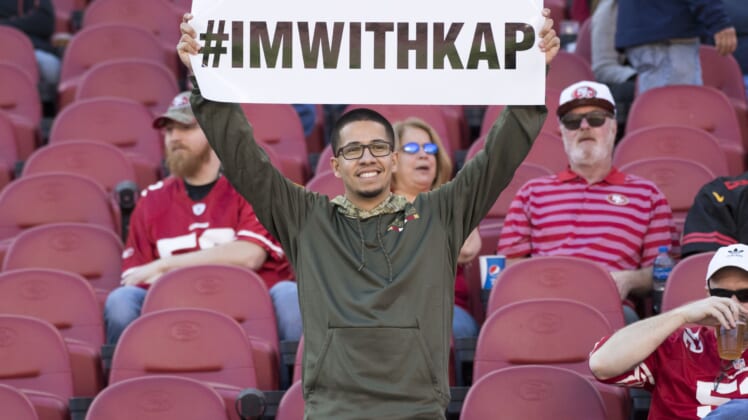 In a stunning interview with TMZ Sports, Favre opened up about Kaepernick. He pointed to the fact that the former San Francisco 49ers quarterback willingly sacrificed his career to fight for social justice and against racism in America.

“It’s not easy for a guy his age — black or white, Hispanic, whatever — to stop something that you’ve always dreamed of doing, and put it on hold, maybe forever, for something that you believe in,” Favre said.

Then he compared Kaepernick to Pat Tillman, who left the NFL to serve his country and died in the line of duty fighting as an Army Ranger in Afghanistan.

“I can only think of right off the top of my head, Pat Tillman is another guy that did something similar,” Favre said. “And, we regard him as a hero. So, I’d assume that hero status will be stamped with Kaepernick as well.”

Will Colin Kaepernick sign with an NFL team this summer?

The biggest reason Kaepernick is out of the league right now is, of course, because he sparked the controversial anthem protests in the NFL during the 2016 season. However, the NFL’s public stance has changed in recent weeks, and now there is a big push from the top of the league to get him signed to a team.

To this point, Favre highlighted Kaepernick’s talents as a player said he thinks the free agent quarterback can still play in the NFL.

“I thought he was a dynamic player when he was playing in his prime,” Favre said. “He’s still young and hasn’t been hit in several years, so there’s no reason to think that he’s lost that much of a step.”

During his heyday, Kaepernick was one of the most dangerous playmakers in the league. He led the 49ers to a Super Bowl during the 2012 season and came within one throw of winning the big game.

In 69 regular-season games, Kaepernick passed for 12,271 yards with 72 touchdowns and just 30 touchdowns. Exceptionally dangerous on the ground, he also racked up 2,300 yards and 13 touchdowns rushing.