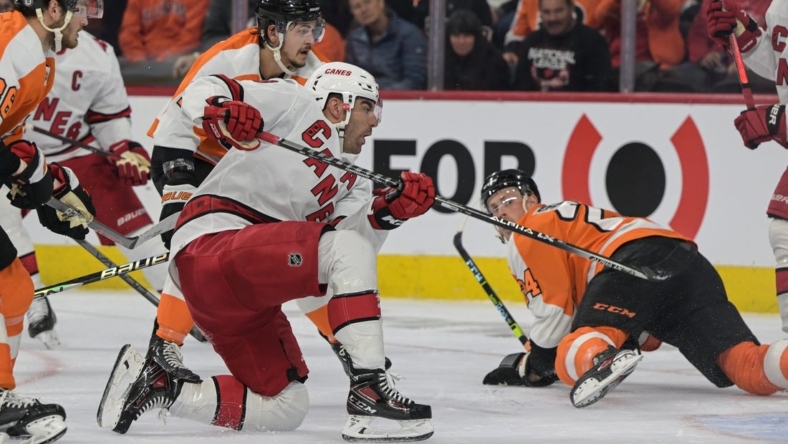 Brent Burns scored with 53.1 seconds remaining in overtime to lift the Carolina Hurricanes past the host Philadelphia Flyers 4-3 on Saturday.

Jordan Staal and Martin Necas each added one goal and one assist for the Hurricanes. Jordan Martinook also scored.

Wade Allison and Nic Deslauriers each had one goal and one assist for the Flyers.

Owen Tippett contributed one goal, and Lukas Sedlak chipped in with two assists.

The Hurricanes went ahead 1-0 when Staal scored at 5:27 of the first period. The puck eluded Hart on the short side and squeezed just inside the post for a goal in Staal’s 1,100th career game.

Martinook found himself free in front of the net and connected at 15:04 of the first for a 2-0 advantage.

Philadelphia closed within 2-1 when Deslauriers scored at 5:14 of the second.

Philadelphia kept the offensive pressure on and tied the game at 7:18 of the second after Tippett’s shot on a power play went between Raanta’s pads.

Carolina struggled offensively for large stretches, committed some costly turnovers in its own zone and went into the intermission following the second tied at 2.

Travis Konecny had a great chance to give the Flyers the lead at 1:09 of the third, but Raanta sprawled out to make the save and keep things even.

The Flyers kept attacking and took a 3-2 lead when Allison scored at 6:09.

The Hurricanes quickly came back with a flurry of scoring chances, with two coming from Jaccob Slavin.

Carolina then equalized at 17:55 when Necas ripped a wrist shot into the upper corner of the net.

Burns then scored the game-winner as the Flyers were unable to make a line change.