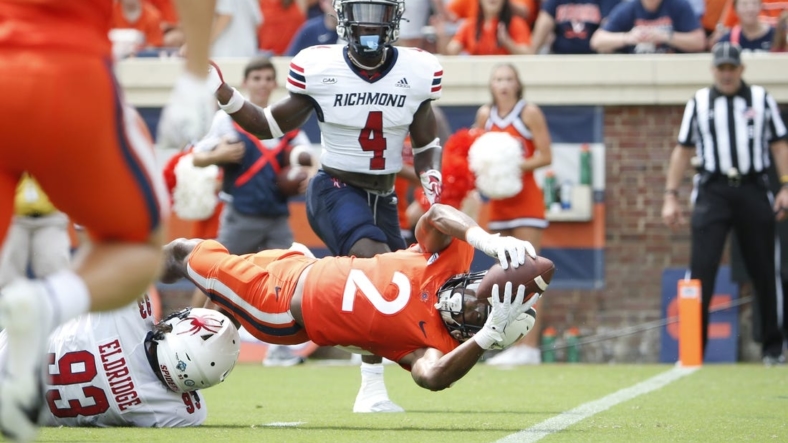 Virginia’s Brennan Armstrong passed for 246 yards and two touchdowns and rushed for 105 yards and a score on a record-setting day. He completed 21 of 33 passes with one interception. Perris Jones rushed for 104 yards and had rushing and receiving touchdowns.

Reece Udinski passed for 160 yards and a TD and Savon Smith rushed for 88 yards and a score for the Spiders of the FCS.

The Spiders got within 28-17 early in the third quarter on Udinski’s 5-yard pass to Smith.

Richmond threatened again late in the quarter, driving to the Virginia 36-yard line before the Cavaliers got a fourth-down stop.

Virginia capped the ensuing drive with Armstrong’s 11-yard pass to Jones in the end zone for a 34-17 lead with 11:51 remaining.

Elliott said he wanted to bring more balance to the Virginia offense and the Cavaliers finished with 259 yards on the ground and 246 in the air.

Just 31 seconds later, Armstrong connected with Lavel Davis Jr. for a 56-yard touchdown pass. It was the first catch since 2020 for Davis, who missed all of last season with a torn ACL.

Jones’ 15-yard TD run gave Virginia its first lead at 14-7 in the final seconds of the first quarter.

Armstrong’s 64-yard run early in the second quarter made it 21-7 and made him Virginia’s all-time leader in total offense, passing Bryce Perkins (7,910 yards). Armstrong finished the game with 8,071 yards.

The Cavaliers took a 28-10 lead into intermission when Mike Hollins recovered his own fumble in the end zone.