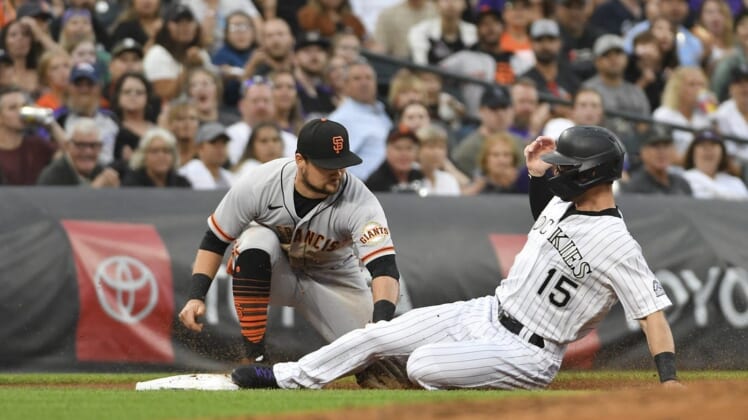 Brendan Rodgers had four hits, including a walk-off single in the 10th inning, and the Colorado Rockies beat the San Francisco Giants 4-3 in Denver on Saturday night.

Ryan McMahon had three hits and Lucas Gilbreath (2-0) pitched one inning of relief for the Rockies.

Brandon Crawford homered among his two hits and Joey Bart also went deep for the Giants, who have lost four straight.

Colorado won it when Rodgers lined a single to center off Camilo Doval (4-6) to drive home Wynton Bernard, who started the inning at second base.

The Rockies went ahead in the third inning off starter Alex Cobb, but baserunning errors cost them a chance for more. With one out, Jose Iglesias and Charlie Blackmon singled and Rodgers doubled to right to drive in the first run.

Randal Grichuk hit a sharp grounder to third and Blackmon was caught down the line and was eventually tagged for the second out of the inning. McMahon’s single brought home Rodgers but Grichuk was thrown out trying to go first to third to end the inning.

Colorado starter Ryan Feltner started the game with three perfect innings and got two quick outs in the fourth before Wilmer Flores tripled to right-center.

The triple and a two-out walk in the fifth inning were the only baserunners Feltner allowed until Bart led off the sixth with his 10th home run, a 419-foot shot into the seats in left.

Feltner left after striking out Joc Pederson to end the inning. He allowed one run on two hits and struck out five.

Crawford tied it in the seventh inning with a home run, his seventh, off of Dinelson Lamet, but the Rockies answered in their half against Cobb.

Connor Joe led off with a single, pinch runner Sam Hilliard moved to second on Brian Serven’s sacrifice bunt and scored on a single by Bernard.

Cobb allowed three runs on 10 hits in 6 2/3 innings but was bailed out with a ninth-inning rally.