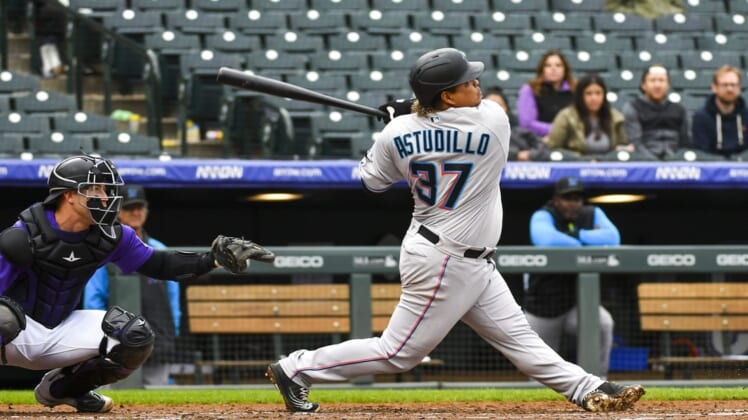 Brendan Rodgers hit three home runs, the final a two-run shot in the bottom of the 10th, and the Colorado Rockies beat the Miami Marlins 13-12 on Wednesday night to split the doubleheader.

Brian Serven had three hits and Jose Iglesias, Randal Grichuk, Ryan McMahon and Garrett Hampson had two hits each for the Rockies. Daniel Bard (3-2) pitched two innings for the win.

Rodgers, who extended his hitting streak to 19 games, launched a 3-2 pitch off Cole Susler (0-3) to win it for Colorado. It was his fifth home run of the season.

Miguel Rojas and Willians Astudillo both homered and finished with two hits, Jesus Sanchez also went deep and Jon Bertl and Avisail Garcia also had two hits for the Marlins.

Rodgers’ first home run gave the Rockies a 1-0 lead in the second, and Serven’s RBI single added another run.

Miami came back in the third. Rojas led off with a homer, Jacob Stallings followed with a single and Astudillo homered to make it 3-2. Colorado answered in the bottom of the third on McMahon’s bases-loaded triple.

The Marlins rallied in the fourth. Jesus Aguilar walked and Sanchez homered to center, his sixth of the season and second of the series, to tie it. A walk, a throwing error by Rodgers and two singles drove in a couple of more runs to give Miami a 7-5 lead.

After knocking starter Trevor Rodgers – who allowed five runs on five hits in 3 2/3 innings – out of the game in the fourth, the Rockies pounded the Marlins bullpen in the fifth. Rodgers led off with his second homer of the day and fourth of the season, Iglesias doubled, went to third on Grichuk’s single and McMahon drove in Iglesias with a double.

Hampson put Colorado in front with a two-run double and scored on Serven’s second single of the night to make it 10-7.

Miami came back again in the sixth. With two outs and the bases loaded, McMahon’s throwing error on Aguilar’s grounder brought home two, and two more scored on Garcia’s single to make it 11-10. Colorado tied it in the bottom of the inning on Serven’s single.