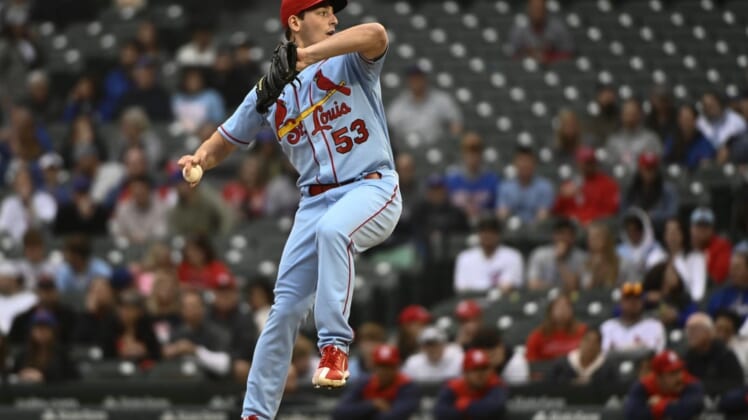 Brendan Donovan delivered a two-run double during a four-run 10th inning as the visiting St. Louis Cardinals overcame a costly baserunning blunder to split a doubleheader against the Chicago Cubs with a 7-4 win in the nightcap on Saturday.

Harrison Bader and Lars Nootbaar also drove in runs in the 10th inning for St. Louis, which lost 6-1 in the first game. Donovan had three hits and drove in four runs, including his go-ahead double with no outs in the 10th against Michael Rucker (0-1).

Giovanny Gallegos (1-2) earned the victory after allowing one unearned run over the final two innings.

St. Louis’ Edmundo Sosa appeared set to score the go-ahead run from second base in the top of the ninth on Nolan Gorman’s two-out single, but he missed third base and had to go back to touch the base. David Robertson then struck out Paul Goldschmidt to end the inning.

Goldschmidt, who had his hitting streak snapped at 25 games in the first game of the doubleheader, extended his on-base streak to 41 games with a single in the nightcap.

Cubs rookie Christopher Morel had two hits and extended a club record by reaching base in his first 20 games. Chicago finished 3-for-18 with runners in scoring position.

Chicago starter Caleb Kilian made his major league debut and allowed three runs on three hits over five innings. He walked two and struck out six.

The Cubs took an early lead in the first inning against Andre Pallante after Morel hit a leadoff single and scored on Willson Contreras’ double to left field.

Pallante allowed one run on four hits over four innings. He walked four and struck out two in his first career start.

Kilian retired the first nine batters faced on 31 pitches before running into trouble in the fourth.

After walking Nolan Arenado to load the bases with one out, the Cardinals pulled even when Tommy Edman scored on a wild pitch. Donovan followed with a two-run double to give St. Louis a 3-1 lead.

Chicago responded with two runs in the sixth. Jason Heyward delivered a run-scoring single and Morel tied the game with an RBI double against Ryan Helsley.