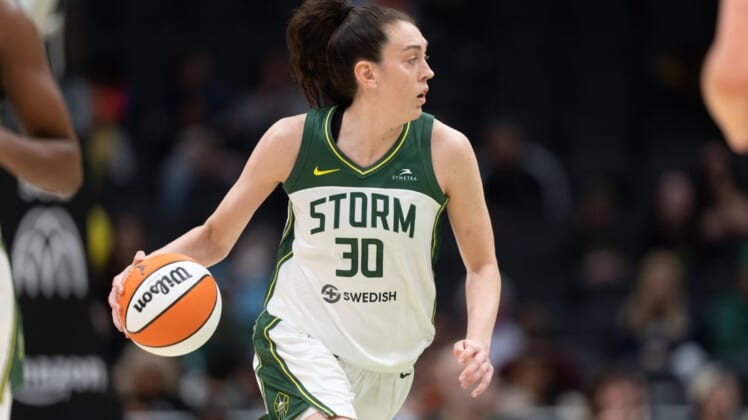 Stewart, who leads the WNBA in scoring this season, shot 6-of-12 from the floor and also had seven rebounds to lead Seattle (16-8). Stewart was one of five Seattle players to score in double digits. Stephanie Talbot had 14 points, Jewell Loyd and Ezi Magbegor each scored 13, and Tina Charles chipped in 11 points and nine rebounds.

The Wings (10-13) were powered by Teaira McCowan’s double-double of 18 points and 10 boards in 27 minutes off the bench. Arike Ogunbowale had 12 points, while Satou Sabally and Tyasha Harris each scored 10.

Ogunbowale, the league’s third-leading scorer, shot just 4-of-18 from the floor and 1-of-8 from 3-point land.

Dallas jumped out to an early 6-2 lead, but Seattle quickly found its groove and broke off a 17-5 run to take a comfortable three-possession lead. Charles and Loyd each had five points during that stretch, each knocking down 3-pointers from 25 feet out.

The Wings rallied back in the second quarter, though, outscoring the Storm 22-14 to take a two-point lead at halftime. Key during that stretch for Dallas was a pair of 3-pointers and a pair of assists from Harris.

Seattle pulled away for good in the second half, first by outscoring the Wings 27-17 in the third quarter, and then holding onto a double-digit lead for much of the fourth quarter. Stewart had 15 points, three assists and a block in the second half for the Storm.

Veteran guard Sue Bird had a game-high seven assists to go along with six points for Seattle. The Storm had 22 assists as a team and shot 47.6 percent from the floor.

Wings guard Allisha Gray did not play. The team announced before tip-off that she was unavailable “due to personal reasons.”

Charli Collier — last year’s No. 1 overall draft pick — also didn’t play for Dallas. After starting in 18 games as a rookie, Collier hasn’t played in 10 of the Wings’ 23 games this season and is averaging just 4.1 minutes per game.