Breaking Down the 5 Likeliest Landing Spots for Todd Gurley

Ben Haley
Courtesy of USA Today: No one should be surprised that Dallas came out of Day 1 without a RB.

One of the most prolific college running backs in the last decade, Georgia’s Todd Gurley is the position’s top prospect for the 2015 NFL Draft. A rusher that would have been talked about going as high as the top five, Gurley unfortunately took a blow to his draft stock after tearing his ACL during the 2014 season. Still, Gurley’s partial resume speaks volumes about the running back’s potential at the next level.

Gurley is one of those once in a lifetime running back prospects with the speed, size, skill and intelligence to excel at the professional level. As a freshman at Georgia, Gurley scored 17 touchdowns, breaking the school’s rookie record and becoming the school’s second rookie to rush for over 1,000 yards since Herschel Walker in 1980. In three seasons at Georgia, Gurley tallied 36 touchdowns and 3,285 yards on 510 carries, an impressive 6.5-yard average. The kicker here is that Gurley amassed these excellent stat totals while playing just 29 games for the Bulldogs.

Now, the end of Gurley’s collegiate career was marred by injury and suspension. The aforementioned ACL tear was the most severe of the factors that kept Gurley off the field for the majority of his senior campaign, but a four-game suspension for selling sports memorabilia didn’t help the back stay on the field. Still, Gurley’s stats and tape provide enough evidence for NFL teams that the Georgia rusher is an elite-level prospect, assuming he returns to his pre-injury form. The 6’1″, 222-pound back is bound for the NFL, but where will he land in the draft?

The Browns have an excellent defense but little-to-no support on the other side of the ball. While rookie rusher Isaiah Crowell burst onto the scene in his rookie season, the Cleveland offense needs more firepower at nearly every position, including running back. A player like Gurley would help make the Browns’ attack relevant and cover up the quarterback play that has been synonymous with Cleveland football for more than a decade.

Gurley is the brand of runner who can control the tempo of a game, which is perfect for a defensive-heavy team. Not only would Gurley be able to take his time recovering from injury behind Crowell, he would enter a situation with little pressure to succeed due to low expectations surrounding the team. Any production from Gurley early in his career would be a bonus, as he would be a major chip to continue the rebuilding process in Cleveland. The Browns have picks 12 and 19 in the draft, and it shouldn’t be a surprise if they snag Gurley at either one of those spots. 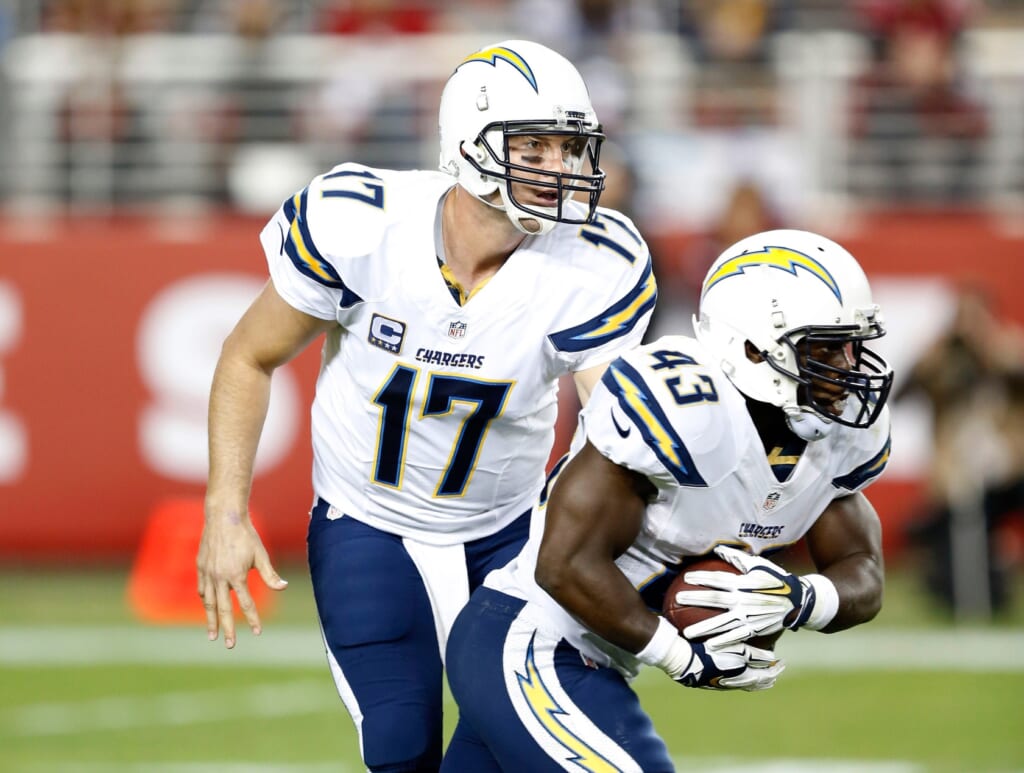 Philip Rivers has a decent back in Branden Oliver, but Gurley would certainly be an upgrade.

While the Chargers have given every indication that they are comfortable starting Branden Oliver in the 2015 season, the team still lacks depth at running back after Ryan Mathews’ departure to Philadelphia. Also on the team’s payroll are Danny Woodhead and Donald Brown, so the trio comprise a solid complementary unit, but none of them can be an every-down back or be relied upon to consistently move the chains.

Gurley on the other hand, is Marshawn Lynch-like with his ability to run north and south. The Chargers must make it their mission to add weapons around an aging Philip Rivers or risk losing their franchise quarterback who has already refused to sign an extension. Drafting Gurley with their pick at 17th overall would add the threat of a dominant ground game to the Chargers’ offense, something the team has not seen since the glory days of LaDainian Tomlinson.

If Todd Gurley is available when the Cowboys pick at No. 27, there is no doubt about who Dallas should select. After losing DeMarco Murray to the rival Philadelphia Eagles this offseason, the Cowboys must improve a backfield that currently consists of Joseph Randle, Darren McFadden and Lance Dunbar. With a dominant run-blocking offensive line already in place, Dallas is in need of a bruising rusher to shoulder the load on the ground and free up Tony Romo in the passing game.

Gurley’s skill set matches exactly what Dallas loves in a back. A runner with good vision and great physicality along with above-average speed and shiftiness, Gurley would make the loss of Murray a moot point for the Cowboys. Dallas’ offense relies on a viable ground threat on early downs to take the focus off of Dez Bryant in the secondary, so Gurley would excel in The Lone Star State. Though there is a good chance he’ll be gone before the Cowboys pick near the end of Round 1, adding the Georgia product would return Dallas’ offense to the form it enjoyed during its 2014 division title run. 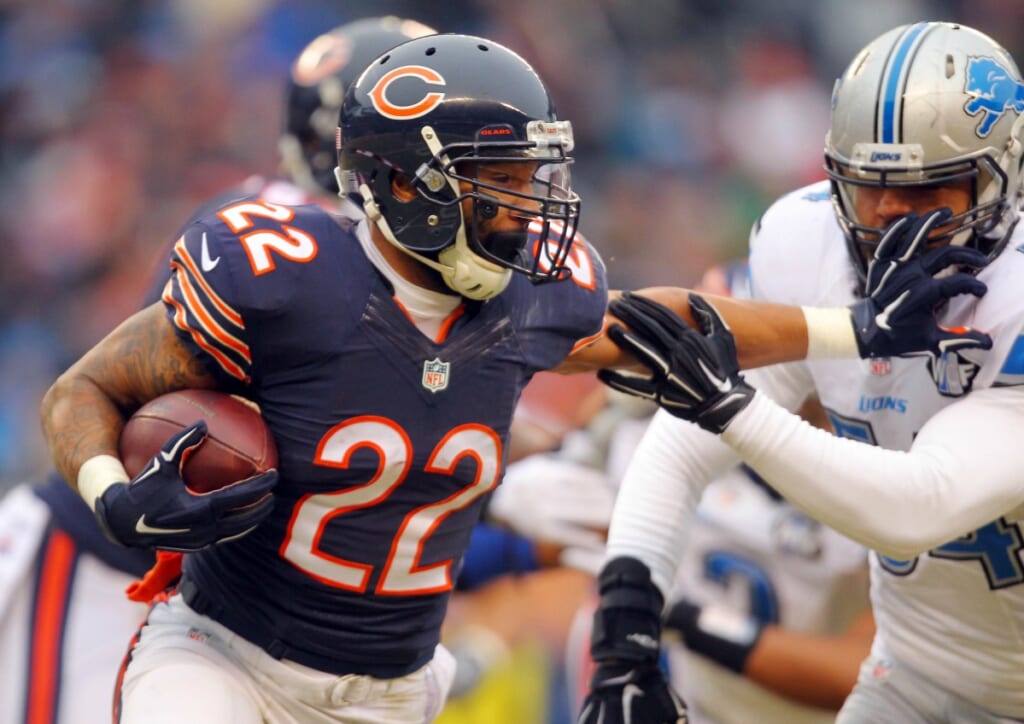 Could 2015 be Matt Forte’s final season in Chicago? Gurley would minimize the impact if it is.

With new head coach John Fox at the helm in Chicago, the Bears might be in for a bit of a shakeup. Brandon Marshall was traded to the New York Jets for a bag of used footballs, so anything is possible for the Bears at this moment. Matt Forte has been the face of Chicago football for a few years, but he’s now 29 and entering the final year of his contract. Although Forte is holding out for a long-term deal to stay in Chicago, indications are the running back will not get the contract he desires.

The Bears pick seventh overall in the NFL draft, and Forte’s potential replacement will almost assuredly be available. While Gurley certainly would fight some growing pains before reaching a Forte-level of skill in the NFL, selecting Gurley would enable the Bears to use Forte one last season while giving the rookie ample time to recover from his ACL injury. Furthermore, drafting Gurley would give Chicago flexibility in regards to Forte without the pressure of having nowhere else to turn. Sure, drafting a running back in the top 10 is risky, but Gurley boasts the talent worthy of a reach.

Indianapolis tried to pair a young, upside-filled rusher in Trent Richardson with Andrew Luck, but T-Rich never lived up to the hype. But do not believe for a second that this team is satisfied with a running back duo consisting of 31-year-old Frank Gore and the elusive, yet untested Dan Herron. If Gurley remains on the board when the Colts pick at 29, Gurley would be a great fit in a Colts’ offense that is locked and loaded heading into 2015.

What’s more, Luck and Gurley would be a force to be reckoned with for a decade. Reminiscent of the Peyton Manning-Edgerrin James pairing from Colts’ seasons past, the duo of Luck and Gurley would put ice-cold fear in the hearts of opposing defensive coordinators. With Gurley at the center of his offense, Luck would be able to pick apart defenses like a glutton at an all-you-can-eat crab feast. Imagine Luck with Gurley at his side like Tom Brady had Corey Dillon; The former was free to impart his own game plan while the latter played his role as a chain-mover to perfection. While the chance Gurley ends up in Indianapolis is slim, Colts fans should salivate at the possibility.