Breaking Down the 5 Likeliest Landing Spots for Jameis Winston

Just a few short weeks ago, it was a foregone conclusion that the Tampa Bay Buccaneers were going to select Jameis Winston with the first pick in the draft later this month. While that may very well still be the case, there are little whispers out there that Tampa Bay may be having second thoughts.

It may very well be a smokescreen, but there is now a possibility that the Buccaneers will pass up on the former Heisman winner with the first pick.

If so, what are the other teams that would be ideal fits for the enigmatic young signal caller?

Winston has been the consensus No. 1 player in the draft. Tampa Bay possesses the top overall pick in the draft and is in desperate need of a quarterback. Let’s not make this more difficult than it is. If the Buccaneers believe Winston fits the bill of a franchise leader off the field, he will be the first pick in the draft. If not, there will be some drama as Roger Goodell heads to the podium to announce the start of the draft later this month.

One thing is clear: Tampa Bay will be selecting a quarterback with the top pick. If it’s not Winston, then Marcus Mariota will find himself off the board at No. 1 overall. How’s that for simplifying the situation?

It’s not yet known who the Titans prefer at No. 2 overall. If the Buccaneers were to shock the world and avoid a quarterback with the top pick, who would the Titans choose with the second pick? While extremely far-fetched, the answer to this question could tell us whether Ken Whisenhunt and company would even consider Mariota should the board play out like many expect.

The only real reason Tennessee finds itself second on this list is because it’s actually selecting second overall. The likelihood that Winston ends up in Nashville next year is remote.

Courtesy of USA Today Images: If Winston falls past one, do the Bears come calling?

Now that we know the Bears will meet with Winston, this shouldn’t come as too much of a surprise. Despite “committing” to Jay Cutler for the 2015 season, there’s no reasonable expectation that the Bears are sold on him as the long-term solution. Heck, we already know how new general managers want a quarterback to call their own. Cutler isn’t that for Ryan Pace.

Logistically, this isn’t necessarily a likely scenario. Chicago will be picking seventh overall in the upcoming draft, and doesn’t have the carrots to dangle in a potential move up unless its willing to part ways with Matt Forte and multiple picks. Even then, it’s hard to imagine the Buccaneers or Titans moving down from the top two slots, the latter of whom would likely snatch Winston up in a heartbeat should he get past Tampa Bay at one.

In terms of fit, this might be Winston’s ideal landing spot. Bears offensive coordinator Adam Gase utilizes a system that best suits pocket passers with limited mobility. And in reality, that’s what Winston is right now. He’d have a true No. 1 receiver in Alshon Jeffery and could potentially even sit a season.

All the talk in Washington has surrounded Mariota. However, is this a team that wants to take another chance on a mobile quarterback with some major holes in his game? If the Robert Griffin III situation tells us anything, the answer to this question has to be a resounding no.

What if Tampa Bay pulls a 180 and decides that Mariota is the best option for the team, especially considering his clean off-the-field record? That could potentially set up a scenario where multiple teams would be looking to give up the house to move up to No. 2 with the Titans. If history tells us anything, Daniel Snyder and company are more than willing to give up said house. Heck, they might throw in a couple organs and the team’s soul to move up for Winston. 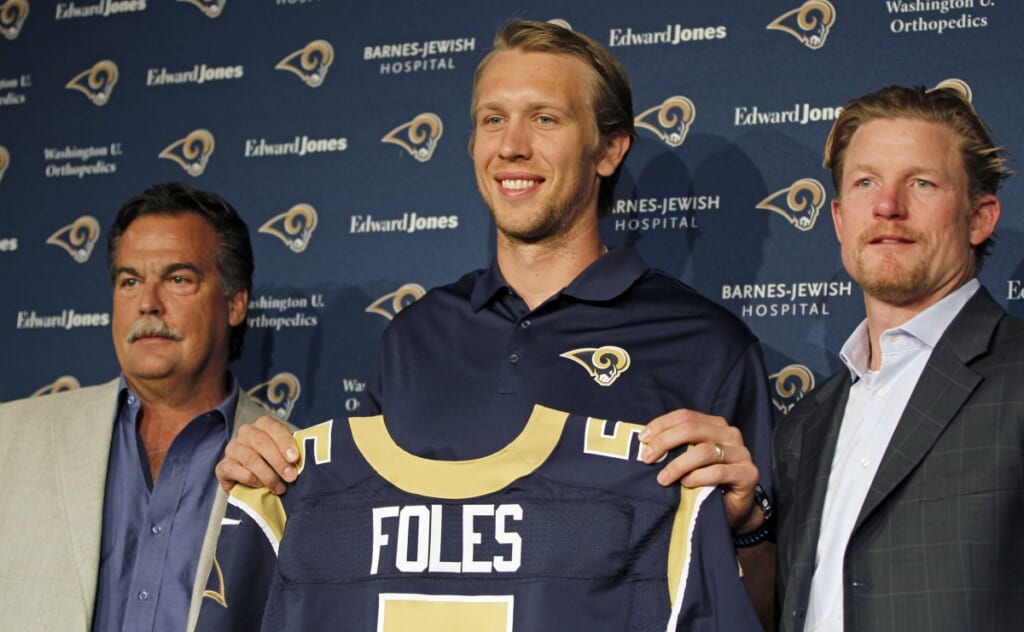 Courtesy of USA Today Images: Are the Rams really sold on Foles?

We already know that the Rams have expressed interest in both Winston and Mariota. Considering it was a foregone conclusion just a couple weeks ago that St. Louis was willing to head into 2015 with Nick Foles as the starter, this team is a true wild card. We have no idea who Les Snead and company prefer right now. Both quarterbacks would seemingly fit into the team’s offensive scheme, so that’s not much of an issue at this point. The larger issue at hand is whether St. Louis, who possesses just six picks in the draft, has the capability of moving from 10 to two should Winston last past the Bucs at one.