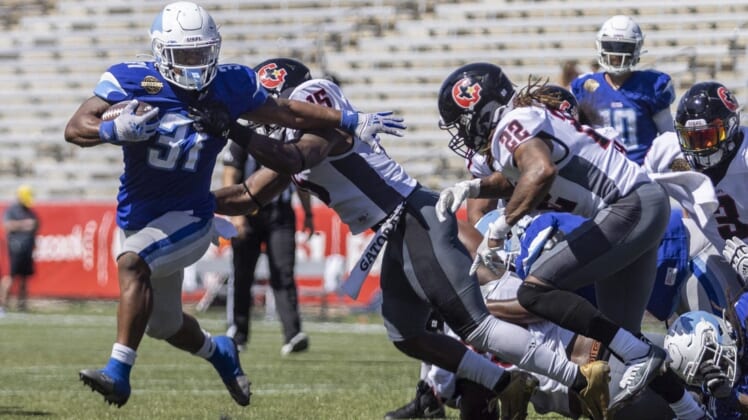 The New Orleans Breakers piled up 17 points in the second quarter, and that was enough to defeat the Tampa Bay Bandits 17-6 in Birmingham, Ala., and clinch the final playoff spot in the inaugural USFL playoffs.

Those teams will join the North Division’s New Jersey Generals (8-1) and Philadelphia Stars (5-3) when the playoffs begin June 25 at Hall of Fame Stadium in Canton, Ohio.

Breakers quarterback Zach Smith, who threw for 8,223 yards in two seasons each with Baylor and Tulsa from 2016 to 2020, went 5 of 6 passing for 51 yards, but 21 of those yards came on a touchdown toss to Sal Cannella with 7:27 left in the second quarter.

After the Bandits lost their second fumble of the quarter, Taylor Bertolet capitalized with a 26-yard field goal with 5:01 left before halftime to extend the lead to 9-0.

Five plays later, the Breakers had the ball back after cornerback Derrick Jones intercepted a pass by Jordan Ta’amu at the New Orleans 43 and returned it to the Tampa Bay 5. After an unnecessary roughness penalty moved the ball to the 3, Jordan Ellis needed just one play to rush for the touchdown. The Breakers added the two-point conversion when Kyle Sloter completed a pass to Cannella.

Smith had come on in relief of Sloter, who completed 7 of 14 passes for 48 yards and an interception.

Ta’amu went 22 of 39 passing for 288 yards and one touchdown and two interceptions. He also rushed nine times for 86 yards.

The Bandits got on the board with 11:32 left in the game on Ta’amu’s 31-yard toss to Rashard Davis, capping a 71-yard drive. Davis finished with six catches for 112 yards.