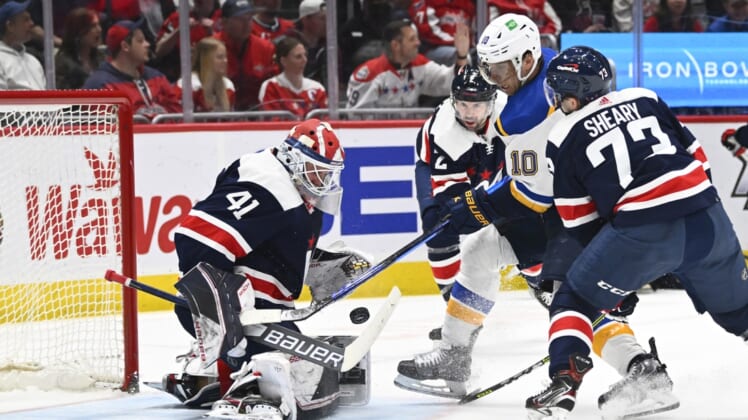 Brayden Schenn recorded a goal and two assists as the visiting St. Louis Blues beat the Washington Capitals 5-2 on Tuesday to snap a three-game losing streak.

Brandon Saad and David Perron each had a goal and an assist for St. Louis, which had won just two of its previous nine games (2-4-3). Ryan O’Reilly and Nathan Walker also scored, and Ville Husso made 19 saves for the victory.

Tom Wilson logged a goal and an assist, Evgeny Kuznetsov scored and Vitek Vanecek stopped 33 shots for Washington, which has lost two in a row after a 7-0-1 stretch.

Washington’s power-play unit wasted little time going to work, with Evegny scoring on a wrist shot 8:22 into the first period with an assist from Carlson and Wilson.

Saad skated through the Capitals’ defense and answered three minutes later with an unassisted backhander to tie the game.

Wilson gave Washington a 2-1 lead less than two minutes later with an assist from Anthony Mantha.

After the Capitals’ Michal Kempny received an inference call, Ryan O’Reilly tied it again at 17:15 of the first, sending the puck past Vitek Vanecek. Saad and Perron got the assists.

At 10:31 of the second, Schenn took the puck through the neutral zone, got his own rebound and passed to Walker in the crease to give the Blues a 3-2 lead.

The Blues added to their lead when Schenn’s wrist shot made it 4-2 at 17:13 of the middle period.

Washington pulled the goalie with 3:15 left to go, but the Capitals failed to take advantage of the extra attacker, and Perron scored an empty-netter with 29 seconds left.

St. Louis defenseman Torey Krug left with an upper-body injury 6:50 left in the second and did not return.