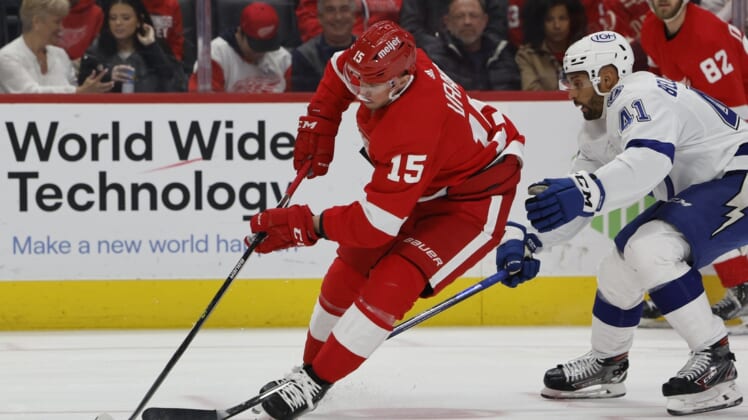 Brayden Point scored the game-winning goal with 2:28 remaining in overtime to lift the Tampa Bay Lightning to a 2-1 road win over the Detroit Red Wings on Saturday.

Point’s goal came on a 4-on-3 power play after Detroit’s Tyler Bertuzzi was penalized for tripping 51 seconds into overtime.

On the overtime goal, Stamkos snapped a shot that Nedeljkovic stopped with his left pad, but a big rebound was left by the Detroit netminder.

Parked in front of the goal, Point took advantage, slamming the rebound into a half-open goal to give Tampa Bay the win.

After the first two periods were scoreless, Detroit got the opening goal of the game with 11:19 remaining.

Pius Suter skated into the Tampa Bay zone, spun around and fed a pass to Sundqvist, who fired a long shot from in-between the top of the face-off circles that seemed to catch Elliott off-guard.

The puck squeezed through the pads of Elliott and into the goal to give Detroit a 1-0 lead.

The score remained that way until 4:38 remaining, when Tampa Bay cashed in on its third power play of the game.

Point stationed himself in front of the net and fed a pass to his left to Stamkos, who fired a shot underneath the stick of Nedeljkovic from the side of the goal into the net to tie the game at 1-1.

Detroit was 0-for-5 on the power play for the game.

Tampa Bay won 64 percent of the face-offs and registered 20 blocked shots in the game.