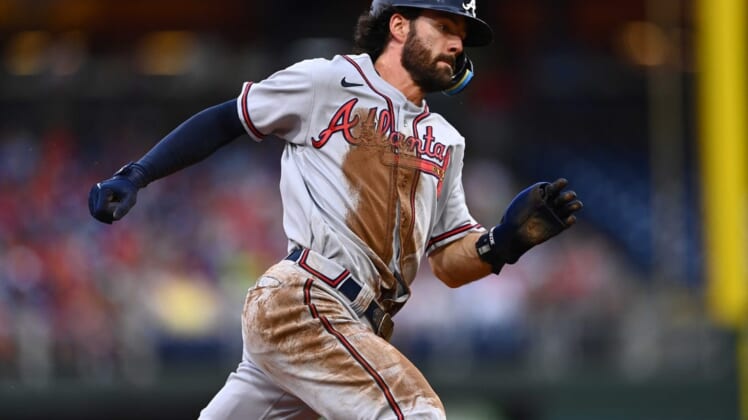 Dansby Swanson had three hits and Austin Riley contributed two doubles and an RBI for the Braves, who snapped a two-game losing skid.

Eddie Rosario also chipped in with two singles and an RBI.

Braves starter Spencer Strider (5-3) tossed six strong innings and gave up three hits and one run to go along with six strikeouts and one walk. Strider threw 90 pitches, 61 for strikes.

Kenley Jansen recorded the final two outs to earn his 23rd save in 27 chances.

Manager Brian Snitker earned his 500th win with the Braves.

Phillies starter Aaron Nola (6-8) allowed seven hits and five runs in six innings. He struck out seven and walked one.

The Braves went ahead 1-0 in the first inning when Riley ripped an RBI double to extend his hitting streak to 18 games.

Atlanta took a 2-0 advantage in the third when Harris hit a solo homer to right.

Rosario’s RBI single in the fourth gave the Braves a 3-0 lead.

In the fifth, Olson hit a two-run homer to right-center for a 5-0 Braves advantage. It was Olson’s 19th home run of the season.

The Phillies managed only two hits through the first five innings, both of which were singles by Bohm for his 29th multi-hit game of the season.

Schwarber blasted a solo homer to center — his 31st of the season — in the sixth to bring the Phillies within 5-1.

Harris added an RBI double off Nick Nelson in the ninth for a 6-1 advantage.

In the bottom half of the inning, Realmuto lofted a two-run homer to left off Will Smith to cut the deficit to 6-3.