Braves use five-run fifth to stay perfect against Pirates 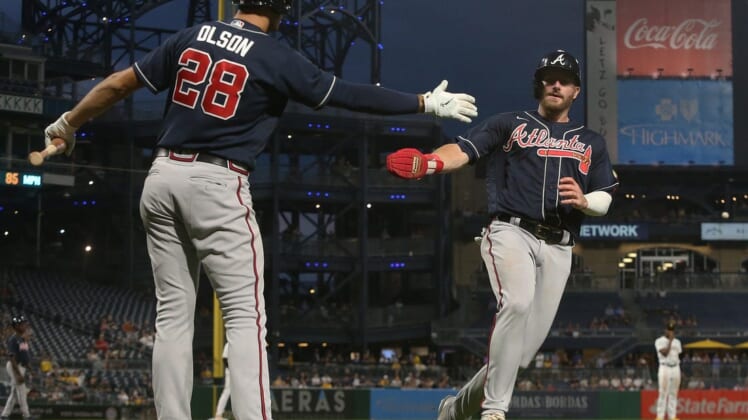 Vaughn Grissom was 3-for-4. He, Robbie Grossman and Austin Riley each had an RBI single for the Braves, who have won five of their past six games and 13 of 15 while matching a season high with their eighth straight road win.

The Braves also improved to 6-0 against Pittsburgh this year.

Fried (12-4) gave up one run, allowed just four baserunners on three hits and a walk, and struck out seven. Collin McHugh pitched a perfect ninth with two strikeouts.

Michael Chavis homered for the Pirates, who have dropped four in a row and 10 of 12.

Pittsburgh starter JT Brubaker (3-11) gave up six runs and nine hits in 6 2/3 innings, with eight strikeouts and one walk.

Through four innings, each team had just one hit, with the Pirates’ giving them a lead.

With one out in the second, Chavis banged his 13th homer, to left, for the first hit of the game and a 1-0 edge.

Everything changed in the fifth. It started with d’Arnaud knocking his 13th homer, also to left, for a 1-1 tie. It was the first of six straight hits for the Braves.

William Contreras singled to right-center, moved to third on Michael Harris II’s double to left-center and scored on Grissom’s base hit to left for a 2-1 Atlanta lead. Grossman’s single to right drove in Harris to make it 3-1.

Ronald Acuna Jr. then singled to right. Grissom scored on Dansby Swanson’s groundout, and Grossman came home on Riley’s sacrifice fly to center for a 5-1 game.

In the seventh, Acuna reached on a fielder’s choice and moved from first to third on Swanson’s single. Chase De Jong relieved Brubaker and gave up an RBI single to left by Riley to make it 6-1.