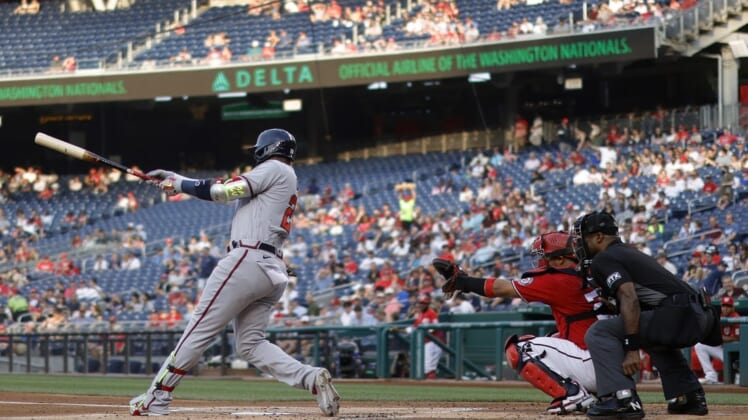 Austin Riley belted a pair of two-run homers Wednesday to help the visiting Atlanta Braves extend their winning streak to 14 games, courtesy of an 8-2 victory over the Washington Nationals.

The Braves’ winning streak is the second-longest in franchise history, with the previous 14-game run set in 2013. Atlanta can match the franchise record of 15 set by the 2000 squad with a road victory over the Chicago Cubs on Friday.

Braves starter Spencer Strider (3-2) allowed two runs on one hit and struck out a career-high 11 batters over 5 2/3 innings.

Atlanta’s Orlando Arcia went deep to lead off the eighth inning to mark his second homer in as many games. Rookie Michael Harris II had a two-run single in the fourth for the Braves, who have won 11 straight games at Nationals Park.

Luis Garcia launched a solo homer in the fifth inning for Washington, which has lost four in a row and seven of its last nine games overall.

Atlanta opened the scoring in the second inning. Marcell Ozuna doubled to lead off the frame and came around to score three batters later after Arcia’s infield single handcuffed third baseman Maikel Franco.

The Braves tacked on two runs in the fourth inning. Ozuna worked a one-out walk from Erick Fedde (4-5) and William Contreras singled before the pair scored on Harris’ two-out single to right field.

Garcia recorded the first hit off Strider by depositing a 3-1 fastball over the wall in right-center field. The homer was Garcia’s second of the season.

Keibert Ruiz’s RBI single in the sixth inning trimmed Washington’s deficit to 3-2 before Riley deposited a first-pitch sinker from Steve Cishek over the center-field wall in the seventh.

Arcia homered to lead off the eighth inning before Riley sent a first-pitch curveball from Carl Edwards Jr. over the wall in left field. Riley’s two homers on Wednesday lifted his total to a team-high 18 this season.

Fedde fell to 0-5 in nine career games (eight starts) versus Atlanta after permitting three runs on seven hits in 5 1/3 innings.