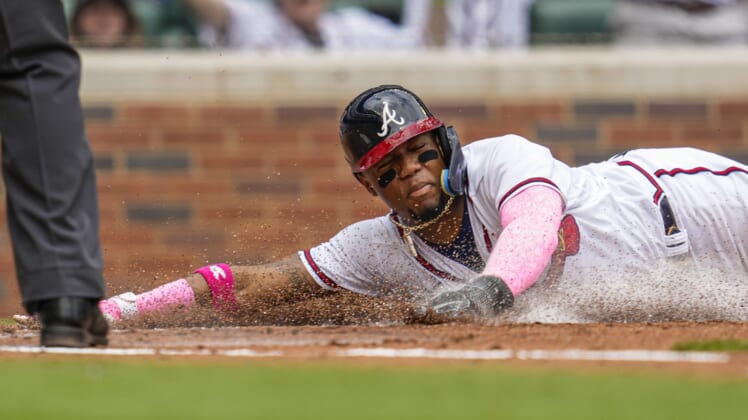 Charlie Morton rediscovered his form with five shutout innings and William Contreras drove in four runs to spark the Atlanta Braves to a 9-2 win over the visiting Milwaukee Brewers in the rubber game of their three-game series on Sunday.

It was only the second series win of the season for the Braves, who improved their record in day games to 3-8.

Morton (2-3) broke a three-game losing streak. He allowed only two hits, walked three and struck out five. The veteran had allowed 17 runs (16 earned) over 18 1/3 innings in his previous four starts. It was his first win over Milwaukee since Sept. 11, 2015, when he was with the Pittsburgh Pirates.

Contreras drove in one run with a bases-loaded walk in the second inning and hit a three-run homer, his third, to left-center in the fifth inning that put the game away.

The losing pitcher was Aaron Ashby (0-3), who pitched four innings and allowed six runs on six hits, four walks and three strikeouts. He also had a wild pitch and committed an error. Ashby’s ERA soared from 2.33 to 4.24.

Atlanta’s Ronald Acuna Jr. was 2-for-4 with a double, one RBI and one run scored.

Acuna singled to open the game and extended his streak of reaching base to 23 straight games, the longest in the National League. Acuna’s streak goes back to June 25, when he suffered a season-ending knee injury. He has reached safely in all nine games played this year.

The Braves scored four times in the second inning. After Contreras walked with the bases loaded, the Braves scored on Acuna’s fielder’s choice and Matt Olson’s two-run double.

Atlanta made it 5-0 on Adam Duvall’s solo homer, his second, in the third and struck again for a run in the fourth when Dansby Swanson scored on a wild pitch.

Milwaukee scored twice against reliever Tyler Matzek in the eighth inning. Pinch-hitter Michael Brosseau had an RBI single and the Brewers scored again when Christian Yelich grounded into a double play.