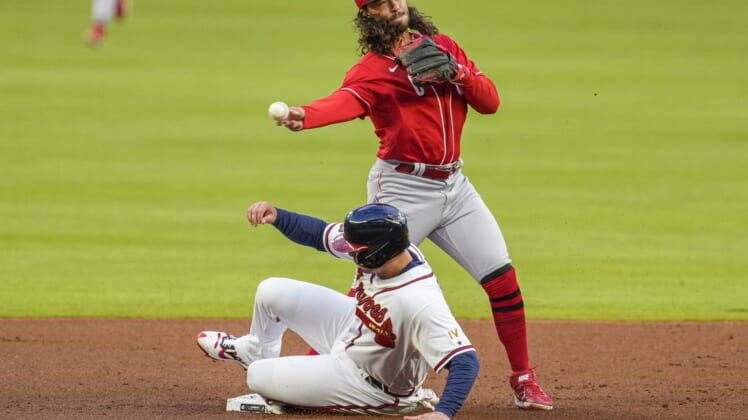 The defending World Series champions recovered from their Opening Night flop but only before a major scare from the Cincinnati Reds.

Charlie Morton retired the first 12 batters he faced and Travis d’Arnaud singled twice and drove in three runs as the Atlanta Braves hung on to edge the visiting Cincinnati Reds 7-6 Friday night. The Braves raced out to a 7-0 lead after three innings.

Morton (1-0) was perfect over the first four innings and allowed two hits and two runs over 5 1/3 innings, walking one and striking out five.

Joey Votto, who like Morton was drafted in 2002, singled cleanly up the middle on Morton’s first pitch of the fifth inning to end any hopes of a history-making night.

Newly acquired closer Kenley Jansen was very shaky in his Braves debut in the ninth, barely closing out Atlanta’s first win of 2022. In the non-save situation, Jansen allowed three hits, three runs, and walked a batter before Jonathan India flew out to center to end the game.

The Reds were playing catch-up all night because starter Reiver Sanmartin (0-1) struggled badly with control.

Sanmartin was not as fortunate in the second inning as two of the three batters he walked in the inning came around to score. d’Arnaud singled home one run and Orlando Arcia plated another with a sacrifice fly.

The Braves immediately added on against reliever Jeff Hoffman, as d’Arnaud singled home Ozuna and Duvall for a 5-0 lead. Arcia added an RBI single and Ozzie Albies added an RBI fielder’s choice to cap the five-run outburst and put Atlanta up, 7-0.

The Reds broke up the shutout bid in the fifth when Mike Moustakas drove home Votto with a sacrifice fly.