Braves score 5 runs in 2nd to take down Cardinals 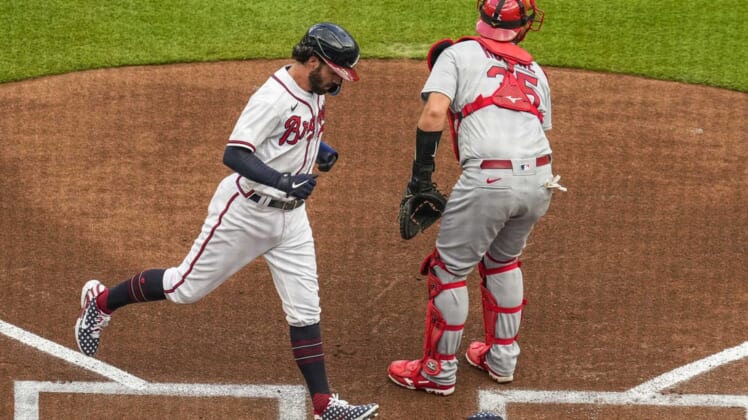 Dansby Swanson’s bases-clearing double sparked a five-run outburst in the second inning and the Atlanta Braves hung on to beat the visiting St. Louis Cardinals 6-3 on Monday.

The game was delayed two hours and 37 minutes after the fourth inning because of rain.

Swanson went 2-for-4 with a double, three RBIs and two runs. Over his last four games, Swanson is hitting .500 (9-for-18) with four doubles, six RBIs and scored four runs.

The rain delay cost Kyle Wright an opportunity to win his 10th game. He pitched four innings and allowed only one run (unearned) on three hits, one walk and two strikeouts. Wright did not return after the long delay and did not pitch the required five innings to get the win.

Jesse Chavez (2-1) pitched two innings after the rain delay. Winning pitcher Darren O’Day (2-2), Dylan Lee and Will Smith each pitched a scoreless inning of relief. Smith got out of a base-loaded jam in the ninth and earned his fifth save.

The losing pitcher was Dakota Hudson (6-5), who gave up six runs — matching his season high — on nine hits, three walks and two strikeouts in four innings.

The Braves scored a run in the first on Matt Olson’s RBI single.

Atlanta scored five times in the second inning to take a 6-0 lead. Marcell Ozuna scored when Ronald Acuna Jr. walked with the bases loaded and Swanson followed with a three-run double. Olson finished the rally with another run-scoring single.

The Cardinals cut the lead to 6-1 on Conner Capel’s sacrifice fly.

St. Louis got back in the game in the sixth inning with a pair of solo home runs off Chavez, ending his stretch of 15 1/3 scoreless innings. Juan Yepez hit his 11th homer, just inside the foul pole in left field, and Capel hit his first career homer on a long fly to center field.

St. Louis reliever Johan Oviedo was hit in the right hand by a line drive in the sixth inning and had to leave the game. X-rays were negative.