Braves recall Robinson Cano ahead of series vs. Mets 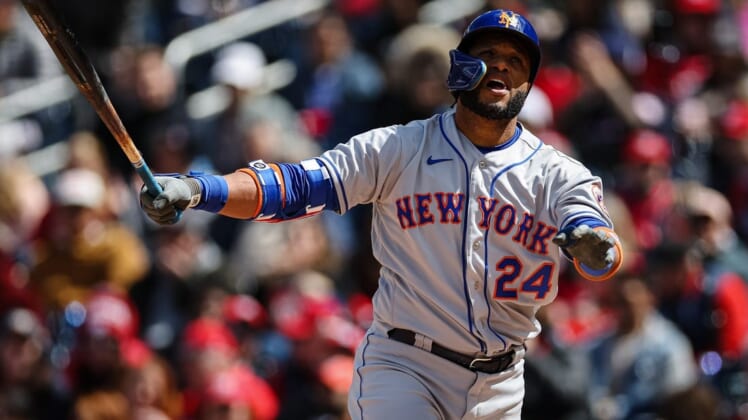 Atlanta reinstated outfielder Adam Duvall from the paternity list and recalled Robinson Cano on Monday ahead of the Braves’ series opener against the New York Mets.

In a twist, the Mets are paying the 39-year-old Cano to play against them.

The Braves acquired Cano from the San Diego Padres on Sunday night in exchange for cash considerations. San Diego signed Cano after the Mets released him in May, and he appeared in 12 games with the Padres before they designated him for assignment.

The Mets are on the hook for the remaining two years and prorated amount of $40.5 million on Cano’s contract from the start of the season.

The Braves are looking for a reliable second baseman to fill in for Ozzie Albies, who is expected to be out until mid-August because of a foot injury. Atlanta could platoon Cano, a left-handed hitter, and right-handed hitter Orlando Arcia as it waits for Albies to return.

In 24 games this season between the Mets and Padres, he hit .149 with one home run and four RBIs.

Cano has earned eight All-Star selections and won two Gold Glove awards. He won a World Series title with the Yankees in 2009.

He also has twice been suspended by Major League Baseball for using performance-enhancing drugs. He missed 80 games in 2018, and then the entire 2021 season.

The Mets and Braves kick off a three-game series Monday night in Atlanta. The Braves enter the game just 1.5 games behind the Mets in the National League East. The teams have split four games so far this season.