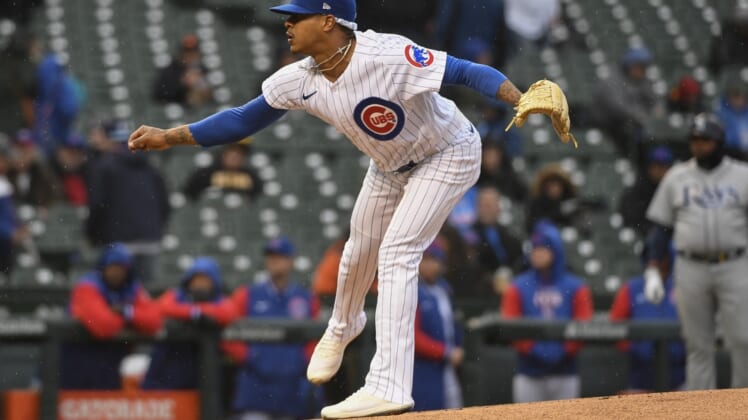 Chicago Cubs right-hander Marcus Stroman, coming off a subpar outing, has a daunting challenge ahead with a matchup against Braves left-hander Max Fried, when the teams open a three-game series Tuesday in Atlanta.

Both teams had Monday off after losing a home series. The Cubs dropped three of four to the Pittsburgh Pirates and have lost five of their past six. The Braves lost two of three to the Miami Marlins and have dropped five of seven.

Stroman (0-2, 8.78 ERA) was roughed up for a season-high eight runs (seven earned) and eight hits by Tampa Bay on April 20 and has allowed a combined 13 runs (12 earned) over his past two starts.

“Nothing seems synonymous,” Stroman said after his start on Wednesday. “Every pitch essentially feels like I’m doing something different mechanically. It kind of comes and goes in stretches. I feel great for an inning or a few batters and then kind of just lose it.”

Stroman had a stretch where he retired eight of 11 batters, but never had command of his sinker and had to rely more on his four-seam fastball.

“It’s frustrating because I feel great for a few pitches or a batter and then I won’t know where it’s coming from, where I’m off,” he said. “Usually I’m pretty good at making in-game adjustments and it’s been a struggle for me right now. … This is not having a bad season. This is two bad starts and I’m going to keep at it and keep moving forward.”

Stroman has been successful against Atlanta throughout his career. He is 4-1 against the Braves with a 2.10 in six career starts. He last faced them July 26 as a member of the New York Mets and took the loss despite allowing only two runs in five innings.

The Cubs need Stroman to return to form to open a challenging stretch. Their next 11 games, through May 8, are against the World Series-champion Braves, as well as three other three other 2021 playoff clubs: Milwaukee Brewers, Chicago White Sox, Los Angeles Dodgers.

Fried (1-2, 3.50) threw seven shutout innings at Los Angeles on April 19, allowing only two hits and striking out eight while getting the best of Dodgers ace Walker Buehler. After a rough opener against the Cincinnati Reds (five runs in 5 2/3 innings) and an average effort against Washington (three runs, two earned in 5 1/3 innings), Fried looked like a Cy Young Award candidate against the Dodgers.

“First two outings, I felt like I was throwing the ball pretty well,” Fried said. “There just happened to be some balls that didn’t find the gloves. (Against the Dodgers), we made some really nice plays and the ball found the glove.”

The Braves continue to await the return of Ronald Acuna Jr. The right fielder has played five rehab games with Triple-A Gwinnett and is batting .357 (5-for-14) with a double and three stolen bases. His target date to return to the Braves is May 6.