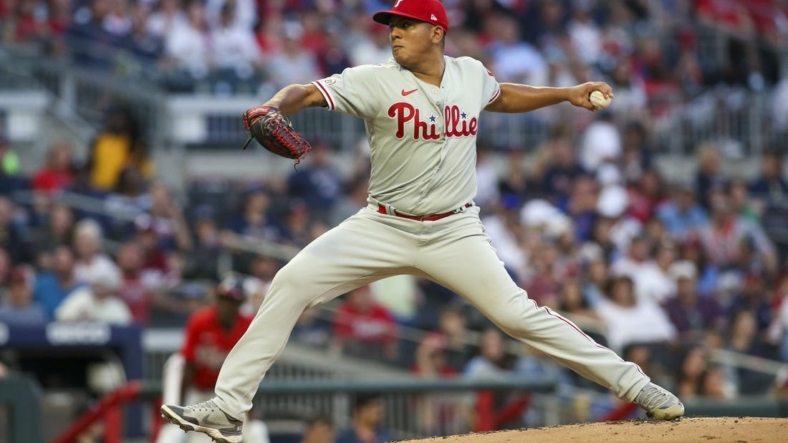 Ronald Acuna Jr. hit a go-ahead two-run home run off Seranthony Dominguez as part of a six-run eighth inning that lifted the host Atlanta Braves past the Philadelphia Phillies 7-2 on Friday.

William Contreras also homered, singled twice and knocked in two runs for the Braves (89-55), who remain one game behind the first-place New York Mets (91-55) in the National League East. Ozzie Albies contributed a two-run double in the eighth.

Jesse Chavez (4-1) earned the win after retiring the only batter he faced.

Kyle Schwarber and Jean Segura each hit a solo home run for the Phillies (80-64), who dropped their second in a row. Dalton Guthrie added two hits.

Phillies starter Ranger Suarez gave up two hits and one run in six innings. He struck out four and walked three.

After the Phillies were held without a baserunner through the first three innings, Schwarber launched a solo homer to open the fourth. It was his career-best and National League-leading 39th this season.

Contreras hit a solo homer to left-center on a 3-0 pitch with two outs in the bottom of the fourth to tie the game at 1.

In the fifth, Segura responded with a leadoff home run to put the Phillies back ahead 2-1.

Fried walked two batters in the sixth, but Bryson Stott grounded out to end the threat.

After Phillies reliever Jose Alvarado appeared to be uncomfortable warming up in the middle of the seventh inning, there was a slight delay before the Braves came to bat as the grounds crew worked to manicure the mound.

Pinch hitter Eddie Rosario walked to open the eighth against Dominguez. Acuna followed with a two-run shot to right for a 3-2 advantage. Later in the frame, Contreras and Michael Harris II each added an RBI single for a three-run lead.

When Albies blooped a two-run double to left, the Braves moved ahead 7-2.