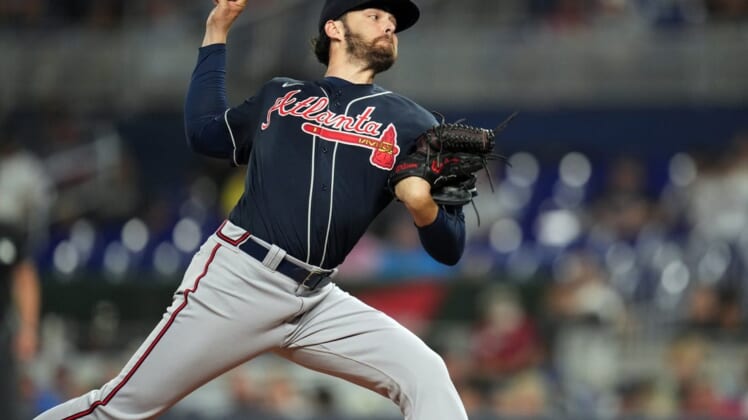 Matt Olson homered for the third straight game and finished with three RBIs, leading the Atlanta Braves to a 6-2 win and a sweep of their doubleheader over the host Miami Marlins on Saturday night.

Ronald Acuna Jr. and Vaughn Grissom also homered in the nightcap for the Braves, who won their fifth straight game.

Acuna hit the first pitch he saw in the first inning for a home, which for him is hardly new. He has hit 26 leadoff homers in his five-year MLB career, including 10 on the first pitch. However, Acuna, who was seen limping midway through the game, was replaced in the field in the seventh inning by Guillermo Heredia.

Jesus Aguilar homered for the Marlins, a shot estimated at 439 feet.

Braves starter Ian Anderson (10-6) earned the win, allowing two runs on five hits and a walk in six innings. He struck out four.

Raisel Iglesias, acquired on Aug. 2 from the Angels, earned the save, his 17th of the season and first with the Braves.
The Marlins went with a bullpen game, and the loss went to starter Tommy Nance (0-1), who allowed one run, two hits and a walk. He fanned six.

The Marlins’ second pitcher, A.J. Ladwig, made his major league debut, allowing four runs and six hits in 3 1/3 innings. He is the 10th Marlins player to make his MLB debut this year.

Anthony Bender, another Marlins reliever, left the game in the ninth inning due to an apparent arm injury.

Atlanta scored on the game’s first pitch as Acuna jumped on a 95-mph fastball.

The Braves made it 3-0 in the fifth as Marcell Ozuna (double) and Grissom (homer) hit Ladwig’s first two pitches of the inning.

Miami cut its deficit to 3-1 in the bottom of the fifth as Luke Williams legged out a two-out triple on a ball that kicked off the wall and away from left fielder Eddie Rosario. Williams scored when Joey Wendle’s dribbler spun away from shortstop Dansby Swanson’s bare-handed attempt.

Both teams scored in the sixth on the solo homers by Olson and Aguilar.

The Braves extended their lead to 6-2 in the seventh as Olson blooped a two-run, two-out single with the, bases loaded single on an 0-2 count.

In the bottom of the ninth, Braves reliever Kirby Yates was pulled after walking two of the first three batters. Iglesias issued another walk but got the last two outs for the save.