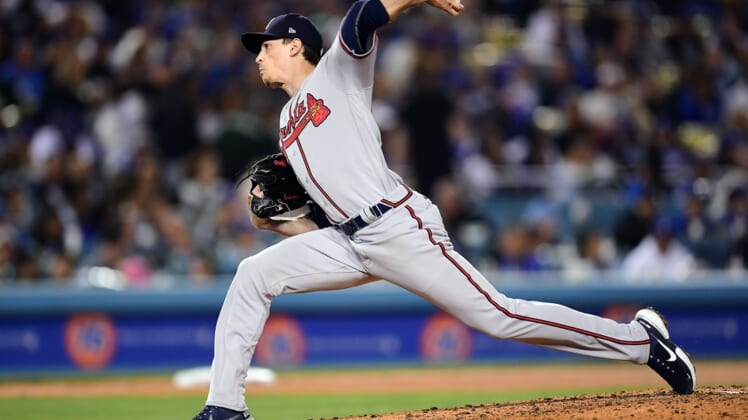 Max Fried was perfect through five innings and Travis d’Arnaud hit a home run as the visiting Atlanta Braves earned a 3-1 victory Tuesday over the Los Angeles Dodgers.

Fried (1-2) retired the first 15 batters he faced before Hanser Alberto singled to lead off the bottom of the sixth inning and finished with two hits allowed over seven scoreless innings.

Former Dodgers closer Kenley Jansen earned the save for the Braves with a perfect ninth inning, his third save in three chances.

Orlando Arcia had an RBI and three hits as the Braves improved to 3-3 on their seven-game California road trip that included a stop at San Diego and ends Wednesday afternoon against the Dodgers.

Dodgers starter Walker Buehler could not keep pace in a battle of staff aces. Buehler (1-1) gave up three runs on eight hits over five innings with one walk and two strikeouts.

The Dodgers saw their seven-game winning streak come to an end, as well as their 20-game home winning streak going back to last season that started with a three-game sweep of the Braves from Aug. 30-Sept. 1.

With one out in the second inning, d’Arnaud hit a home run into the Dodgers’ bullpen in left field on a first-pitch fastball from Buehler.

Arcia gave Atlanta a 2-0 lead in the fourth inning when he cashed in an Eddie Rosario leadoff single with a two-out RBI double. The Braves made it 3-0 in the fifth inning against Buehler when Albies singled with one out, stole second, went to third on a groundout by Matt Olson and scored on a single by Austin Riley.

Fried, a Los Angeles-area native, was cruising with four strikeouts in five perfect innings and finished with eight strikeouts. He had help from Riley on a diving stop of a Trea Turner ground ball to end the fourth, while Adam Duvall caught a Chris Taylor drive to the center-field wall to end the fifth.

Turner had the only other hit off Fried, an infield single in the seventh inning. Alberto had an RBI groundout for the Dodgers in the eighth.