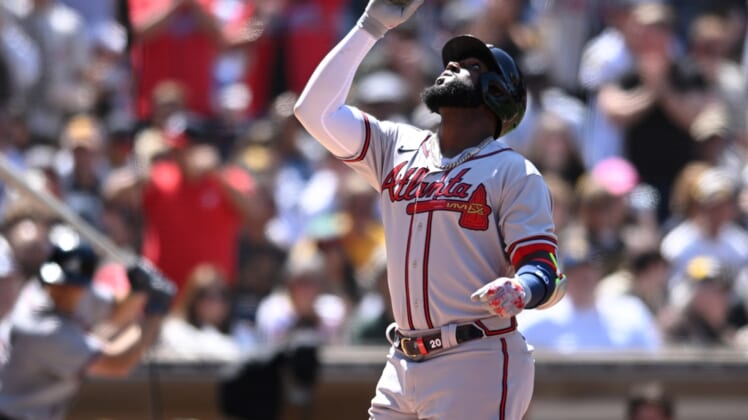 Right-hander Ian Anderson held the Padres to a run on two hits over 5 2/3 innings Saturday and was supported by three solo homers as the visiting Atlanta Braves scored a 5-2 win in San Diego.

Ozzie Albies homered on the game’s second pitch off Padres starter and loser Nick Martinez. Albies has homered in each of the first three games of the series.

Matt Olson and Marcell Ozuna added solo homers in the fifth off Martinez (0-1). The Braves were denied a fourth homer when Padres center fielder Trent Grisham leaped at the center fence in the bottom of the second to deny Manny Pina a two-run homer.

After struggling in spring training and his first start of the season, Anderson retired 12 of the last 13 Padres he faced and allowed only three Padres to reach base. San Diego’s lone run came on a game-tying home run by Jurickson Profar in the second.

The Braves took the lead for good in the top of the fourth. Adam Duvall opened the inning with a double off the right field wall and scored on a two-out single by catcher Pina, who drove home the
Braves’ final run in the sixth with a sacrifice fly.

Albies home run was the switch-hitter’s fourth of the season and the ninth of his career to open a game. Both Albies and Profar are natives of Willemstad, Curacao.

Anderson (1-1), who tied a career-worst with five walks in his first start this season, walked Padres leadoff hitter Trent Grisham to open Saturday’s game. He didn’t walk another hitter and finished with seven strikeouts with six coming on his changeup. Kenley Jansen saved a second straight win.

Atlanta’s final run came against Craig Stammen in the sixth. Dansby Swanson led off the inning with a double, moved to third on a ground out to the right side and scored on Pina’s fly to right.

Grisham homered off Will Smith in the eighth for the Padres’ second run.