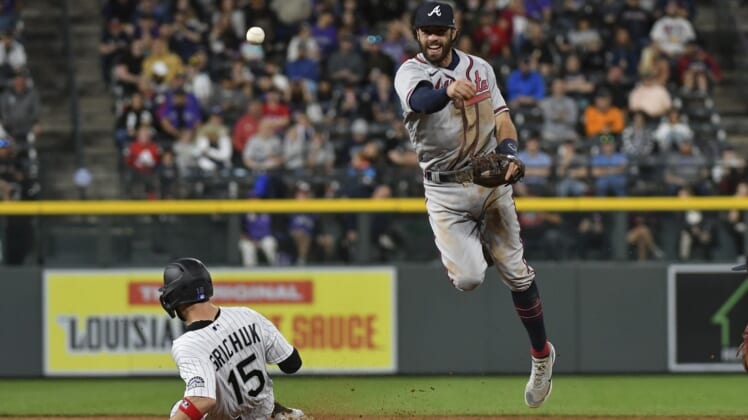 The Atlanta Braves will look to extend their season-high winning streak to four games on Saturday night when they continue their four-game series against the Colorado Rockies in Denver.

The Braves flexed their offensive muscle in a 6-0 romp over the Arizona Diamondbacks on Wednesday and a 13-6 victory in the series opener against Colorado the following day. Atlanta traveled a different path Friday, taking advantage of a pair of wild pitches and a two-run single in a 3-1 win in 10 innings.

Dansby Swanson, who had three singles on Friday, is batting 11-for-30 with six runs and three RBIs during his seven-game hitting streak.

Ronald Acuna Jr. recorded his second multi-hit performance of the series for the Braves, who sent the reeling Rockies to their 18th loss in their last 25 games. Colorado had yielded 39 runs on 51 hits in its previous three games before receiving a strong pitching performance for the first nine innings on Friday.

Atlanta right-hander Spencer Strider (1-2, 3.45 ERA) will look to atone for a tough outing in his first career start when he takes the mound on Saturday.

Strider, 23, allowed five runs on four hits — including a homer — in 4 1/3 innings in a 6-2 setback to the Diamondbacks on Monday.

Although Strider features a fastball that flirts with triple digits, he’s pleased he can confuse batters with his changeup.

“Even if the movement isn’t great, per se, for a changeup, the speed difference is still really big, so that helps me out,” Strider said, according to the Atlanta Journal-Constitution.

Strider would be wise to tread carefully around Connor Joe, who is riding an on-base streak of 30 games.

Colorado left-hander Kyle Freeland (1-5, 4.96) also permitted five runs in his last start and walked a season-high four batters en route to a 6-5 setback at the Washington Nationals. Adding injury to insult, Freeland exited the contest with a left-ankle impingement following an awkward landing on his 107th pitch.

Freeland, however, said he’s ready to take the mound on Saturday.

“On push-off, just felt a shooting pain at the top of my foot right at the joint kind of going down my foot,” Freeland said. “I have no idea what it was. I’ve never had it before, but it was good that X-rays came back negative.”

Freeland owns a 1-2 record with a 5.59 ERA in five career appearances against the Braves.

While it’s uncertain how the Rockies will play on Saturday, they certainly will look different.

Colorado will wear its Nike-designed City Connect alternate jerseys for the first time. The green and white uniforms were patterned off the state’s license plate, which features mountains and pine trees.

“I’ve only seen them on video,” Rockies manager Bud Black said. “I sort of like ’em. I’ve seen them in the stands, just the tops. I haven’t seen the full uni yet.”