Braves gain on Mets with win over Giants 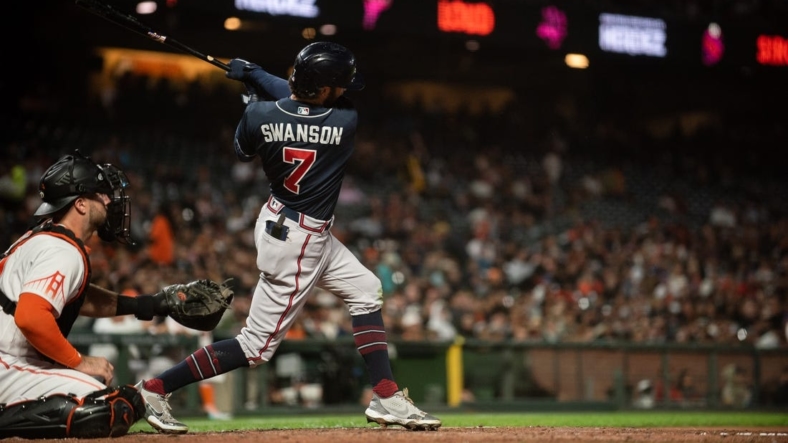 Dansby Swanson broke an early tie with a two-run homer, right-hander Kyle Wright bounced back from a poor performance, and the Atlanta Braves picked up ground on the New York Mets atop the National League East with a 5-1 victory over the host San Francisco Giants on Tuesday night.

In snapping a three-game losing streak, the Braves (88-54) moved within a half-game of the Mets (89-54), who were beaten for a second consecutive day at home by the Chicago Cubs.

Coming off a 3-2 win in the series opener the night before, the Giants jumped on Wright for a first-inning run — on a double by Mike Yastrzemski and an RBI single by Joc Pederson.

But San Francisco got just one more hit off Wright (18-5) — a second-inning single by Joey Bart — and no more runs before he was lifted after 5 1/3 innings.

Bombed for eight runs in four innings by the Oakland Athletics last Tuesday, then given an extra day off in order to shake off the season-worst performance, Wright surrendered just the one run against the Giants. He walked three and struck out four.

By the time the major league wins leader was pulled, the Braves had given him a 4-1 lead, scoring once in the second on an RBI infield out by Robbie Grossman before taking the lead for good with a three-run third.

Swanson’s homer, his 20th of the season, came after Ronald Acuna Jr. had led off the third with a single against Giants starter Jakob Junis (4-6).

A double by Travis d’Arnaud and RBI single by Michael Harris II increased the lead to 4-1 later in the inning.

Swanson made it a three-RBI game in the ninth when his two-out single plated Ehire Adrianza, who had walked and advanced to second on an infield out.

The Braves out-hit the Giants 10-4, with d’Arnaud leading the way with a double and two singles. Swanson, Acuna and Harris chipped in with two hits apiece.

Yastrzemski’s first-inning double was the only extra-base hit for the Giants (68-74), who saw a three-game winning streak come to an end.