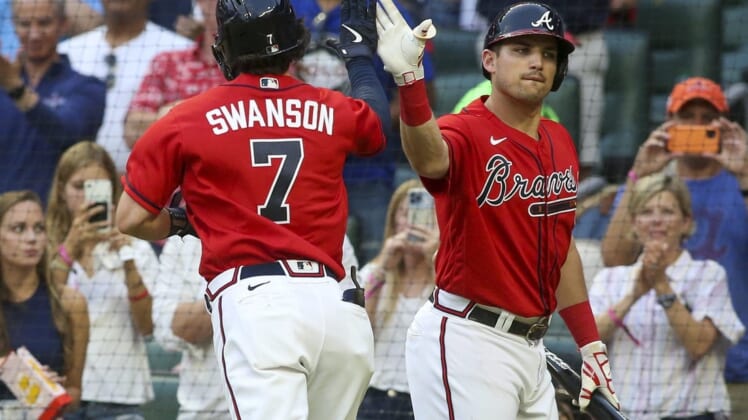 Rookie Spencer Strider pitched 5 2/3 scoreless innings to earn his first win as a starting pitcher and helped the Atlanta Braves extend their winning streak to nine games with a 4-2 win over the visiting Pittsburgh Pirates on Friday.

The hard-throwing right-hander recorded his longest stint since joining the rotation and allowed four hits, one walk and a career-high eight strikeouts. It was his first start at home.

Strider (2-2) left with two outs and runners on the corners in the sixth inning. Left-hander Dylan Lee struck out Cal Mitchell to end the threat.

Kenley Jansen pitched a scoreless ninth to earn his 17th save.

Atlanta’s winning streak is the longest by a National League team this year. The Braves’ last nine-game winning streak came Aug. 13-22, 2021. The Braves have outscored the opposition 59-23 during that streak. Atlanta has won 13 of its last 17.

The losing pitcher was rookie Roansy Contreras (1-1), who pitched 4 2/3 innings and allowed four runs on eight hits, one walk and seven strikeouts.

Atlanta scored first when Swanson hit a two-run two-out homer that just stayed inside the foul pole in left. It was his seventh home run and scored Michael Harris II, who singled and stole second base. Swanson went 3-for-4 and raised his average to .286.

The Braves added a run in the third when Ozzie Albies swatted his 15th double to right field to score Travis d’Arnaud.

Atlanta went ahead 4-0 with a run in the sixth. Matt Olson drove in Harris with a sharp single to right field that barely missed base-runner Swanson.

Pittsburgh broke up the shutout with two runs in the eighth against reliever Jackson Stephens. Michael Chavis drove in the first run with a ground-rule double and Cal Mitchell tacked on another with a sacrifice fly to right field.

Pittsburgh’s Jack Suwinski’s eight-game hitting streak ended when he fanned as a pinch-hitter and struck out against Jansen to end the game.