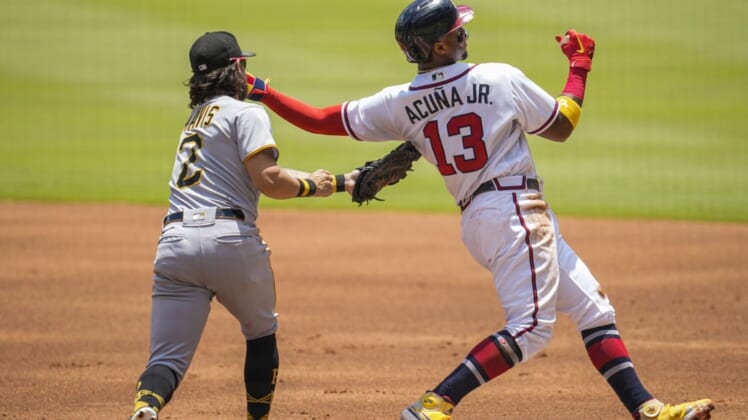 William Contreras and Adam Duvall, the No. 7 and 8 hitters in the Atlanta batting order, combined for three home runs to lead the Braves to their 11th straight win, a 5-3 victory over the visiting Pittsburgh Pirates on Sunday.

The Braves had not won 11 in a row since 2013, when they had a 14-game streak. They matched the Houston Astros and the New York Yankees for the major’s longest winning streak and moved to a season-high seven games over .500.

The Braves swept the four-game series, the first time they’ve done that against the Pirates since 2019.

Contreras was 2-for-4 with a double and a home run, scored two runs and drove in a run. Duvall went 2-for-3 with two homers — his 11th career multi-homer game — and three RBI.

Relievers Will Smith, A.J. Minter and Kenley Jansen finished the game with one scoreless inning apiece. Jansen earned his 18th save.

The loser was Jose Quintana (1-4), who worked five innings and gave up four runs on six hits, one walk and four strikeouts.

The Braves scored two runs in the second inning on back-to-back home runs by Contreras, his ninth, that struck the left-field foul pole, and Duvall, his fifth. It was the third time this season the Braves have hit consecutive home runs.

The Pirates cut the lead to 2-1 in the third inning when Diego Castillo scored on Bryan Reynolds’ sacrifice fly to right field.

The Braves scored two more in the fourth inning when Contreras doubled and Duvall hit his sixth homer, a two-run shot to right.

The Pirates got those runs back in the fifth when Reynolds launched a high two-run homer to right field that scored Tucupita Marcano. Reynolds went 2-for-3 with three RBI and was 10-for-15 for the series.